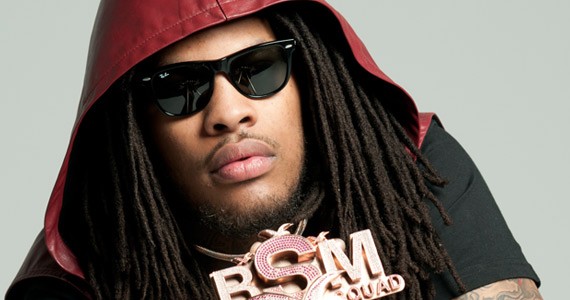 After months of rumors and hearsay, Waka Flocka Flame (given name Juaquin Malphurs) is finally hitting the Halifax Forum on Saturday night. In a city that has a reputation for cancelling big-name rap acts at the last minute due to border troubles and booking issues, it seemed like it might never happen. But it is---Waka Flocka is playing Halifax. Here's a primer to get you up-to-date.

The first thing that needs to be said about Flocka is that he is not the world's most technically gifted rapper by any means. Don't let this fool you though, Flocka's music isn't nearly as dumb as it gets a reputation for and at times he is arrestingly poignant. It may sound like he's just screaming whatever comes into his mind over the same hard-nosed trap beats every Atlanta rapper has been using for the last three years but delve just a little deeper and Flocka unfolds like an onion into one of the most fascinating rappers working today.

Flocka first reached critical and popular attention on the strength of his 2010 debut Flockavelli and its machine-gun blast of a single "Hard in da Paint'" which essentially rewrote the rap music blueprint upon its release. The single introduced a lot of the world to his staccato-burst screaming style, and propelled him and the song's producer Lex Luger into bona fide superstars. If you can name a rapper, they recorded a freestyle over "Hard in da Paint" in the summer of 2010. Its blistering production, full of sinister strings and screaming backup ad libs, is a full-on assault.

However, a true scholar of his oeuvre understands that Juaquin also has the heart of a poet. A deep undercurrent of sadness belies his party jams and murder taunts. His lament that "when my brother died, I said, 'fuck school,'" on "Hard in da Paint" is a perfect example of this Zen focus, summing up everything about his life, his environment and his upbringing in seven words. When he sings "I wish I could fly away" in a pained sing-song on the chorus of "Triple F Outro" you believe him, because he just lost his best friend Slim Dunkin in a shooting death. It is a truly weird and perfect tribute.

Waka songs may get some static for sounding the same, but this is only true in the same way that every punk song sounds the same. He gets typecast for his shouting, hyper aggressive style but he's shown a surprising amount of range, including failed pop-rap crossover record Triple F Life: Friends, Fans & Family, which was weird and pandering, kind of great in its own way but a bewildering follow up to the gritty, shouty Flockavelli. With each release he tries out more cadences, styles and productions like the New York-inspired and criminally underrated French Montana collaboration Lock Out.

Of course, Flockavelli is a diverse man and if there is one element that binds his music together, it's joy. I don't know if the man has actually ever made a music video where he is wearing a shirt, and he displays a genuine love of life in his interviews, videos and music. This weekend I'm not expecting much sadness from Flocka, but I do think he'll take his shirt off and come and party with us.