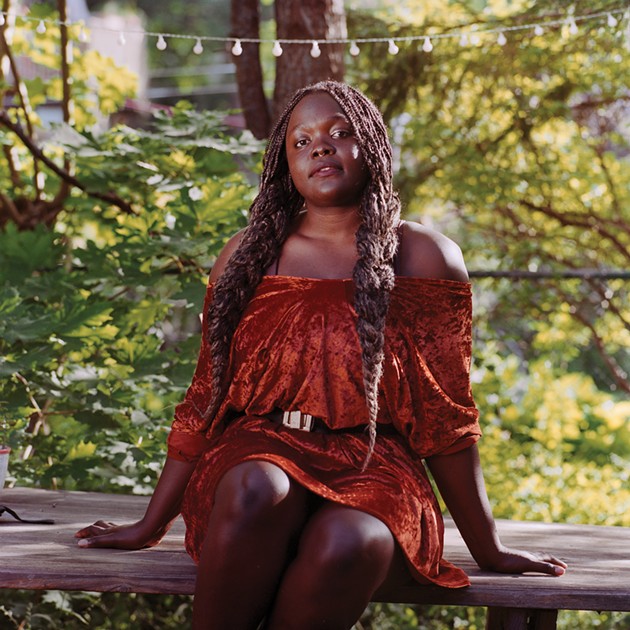 To read Francesca Ekwuyasi describe Halifax is to be immediately nostalgic for our little city by the sea—even while we're still inside its limits. Catching someone's eye on the ferry to Dartmouth; Getting lost in the options available at World Tea House; Feeling part of the thrum of a crowd at Halifax Central Library: As her debut novel Butter Honey Pig Bread moves through Argyle Street and the north end, you'll wish you could, too—and you'll instantly see why the novel landed on the 2020 Giller Prize long list.

To help you feel a little less homesick for where you happen to be right now—and to help you hold on while you continue to shelter in place—Ekwuyasi delivers the following excerpt from Butter Honey Pig Bread. Get ready to fall in love with her brand of velvet-edged storytelling—and with the city built on a place called K'jipuktuk.


Below, an excerpt from Butter Honey Pig Bread by Francesca Ekwuyasi (published by Arsenal Pulp Press, 2020, available now). Printed with permission from the publisher:

During those first few lonely months in Halifax, with its salty fogs and gorgeous ocean and monuments to cruel colonizers, Our Lady was Taiye’s only companion. She followed Taiye on the charming ferry, across the dazzling harbour, to the Akerley campus of the community college, where Taiye took culinary courses. She whispered encouragements when Taiye’s body felt too heavy and entirely uninterested in crawling out of bed to engage with the world, sometimes for whole weekends. She suggested that Taiye attend free lectures at the public Central Library on Spring Garden Road, if only to be around other people, if only to share the same air and hear other voices. Our Lady joined Taiye on long evening walks from where she rented the finished basement in a four-bedroom house on Creighton Street in the North End of the small city. Like her attic flat in London, her place had its own separate door and a tiny afterthought of a kitchen. She only had to share a bathroom with the rotating roster of roommates upstairs.

Their walks invariably included a perch on one of the picnic benches by the harbour, the cold breeze from the ocean whipping through Taiye’s insufficient layers of clothing, raising goosebumps on her skin. It was a simple matter of loneliness. The same grief that drove her to seek respite in the beds of willing women, that drove her into nearly anything that paused her whirling mind, and most recently, that drove her abruptly out of London. It was always the same creature, creeping up and dressed for different occasions, and it felt somewhat matched by the vastness and dramatics of the ocean.

On a particularly frigid Wednesday evening, after a tiresome knife skills class revisiting technique that she’d already learned, Taiye cried cold tears on her bench by the ocean, and then continued her walk up traffic-clogged Barrington Street and onto Argyle Street. She walked down the cobblestoned sidewalks and considered the bars. Many Irish pubs, a Mexican bar, at least two oyster bars, a karaoke bar, a French bistro, a wine bar. She was considering the soothing silence of intoxication when Our Lady said to Taiye, Look at this sweet little place. Check it out.

Taiye turned toward the small tea shop at the back of an old Marriott Hotel, with the words Good Teas displayed in large grey lettering across its bright red awning. She walked inside, smiled at the blue-haired woman at the counter, and scanned the wall behind her for a list of teas.

“We have smelling samples on the wall over there,” Blue Hair said.

Taiye stood, holding small glass jars of tea to her face, mmming at the feast of aromas, losing herself in the green tea section for nearly an hour. On the adjacent wall: black tea blends. She selected a sample jar of lapsang souchong and the deep earth, glowing fire smokiness blossomed ideas of smoked rice, chicken marinated in the potent brew, a glaze made of tea reduction with honey and fish sauce. Taiye, eyes closed, nose buried in the jar, a half smile on her face, was oblivious to the woman watching her with amusement.

“Good?” someone asked, startling Taiye out of her tea-fuelled reverie.

Taiye looked up, saw the owner of the voice, and her smile widened, bashful.

“Really good,” she replied to the woman whose dark skin and sloe eyes roused in Taiye a familiar longing. She turned away, entirely unaware that this person would scrape through her poorly hidden wounds to reveal something worthwhile.

Halifax is a small city, beautiful and old. If you visit during the sweltering height of summer, you can prance along the crowded boardwalk and sway your hips to the music of many buskers performing in the salty breeze of the harbour. You can stop along the waterfront for a variety of full-fat ice creams; salty, saucy, cheesy poutine; sugar-coated beaver tails; fish and chips; and an assortment of taffies, cakes, and sweets. Downtown, you can visit the public gardens, where you may enjoy the pretty flowers, the fountains, and the comical sight of fat bumbling geese in the bird enclosure. If you wander north, to any of the many microbreweries and bistros, it might be difficult to ignore the glaring scars of gentrification, but you must, if you have any intention of savouring your Jonah crab bao, or your mezcal and tepache cocktail. And if while nursing the aforementioned cocktail, you start to wonder where all the Black and Indigenous people are ... well ... we’ll have to get back to that.

If, like Taiye, you turn up in September and are lulled into sentiments of warmth and wellness by all the torrid gorgeousness of red oak trees aflame in autumn, don’t lose hope when the brittle cold descends swiftly and without notice. If you feel discouraged by the severity of that wet winter cold seeping right down to your core, hold tight until spring; it all comes alive again. In the meantime, there will be hot tea, wool socks, warm bread, and soups to tide you over.

By mid-March, after a lonely Christmas that included Catholic Mass, a two-hour video call with her mother, and the drunken preparation of a Christmas feast that she lived off for over a week, Taiye found her rhythm, just as the air started to warm and the trees slowly clothed themselves in green again.

Her culinary skills program was chugging along, and as she sat on the top deck of the ferry from Woodside to Halifax, Taiye saw the woman from the tea shop again.

The woman had a boyish demeanour and was leaning against the railing, beside a sign that read Do Not Lean Over Guard Rail. Beside her was a lanky child with chunky chin-length locs, also leaning against the railing. They wore matching black patent leather boots, the kind that Taiye associated with American punks. Both pairs were covered in the chalky white salt stains. Taiye was sure it was the same person from the tea shop, if only by the deep belly gnaw of attraction she felt toward her.

When the woman threw her head back in laughter, her hood fell to reveal a short tapered afro with a sharp undercut. As if she was suddenly aware of Taiye’s gaze, the woman turned in her direction. When her eyes settled on Taiye, she raised a thick brow and offered a small smile that illuminated her fine-boned features.

Taiye’s smile in return was much more tentative—feeble, in fact. She was uncharacteristically cautious: keeping to herself at school, keeping off dating apps, keeping away from most of her favourite vices. No cocaine with strangers, no shrooms with new lovers, no booze with beloved friends, no sex with anyone but herself. No one to abandon, and no one by whom to be abandoned.

By the time the woman looked in her direction again, Taiye was gone. Down to the interior of the cabin, perched on a seat close to the exit. Ready to jet off the ferry once it docked, before she could convince herself to ride out her desire for touch.

The walk home took an eternity. Halfway to Taiye’s place, Our Lady took her hand and asked, What are you afraid of?