Walrus works it out

The Halifax heavyweight returns in time for HPX with a new album that sounds like rock from a distant planet. 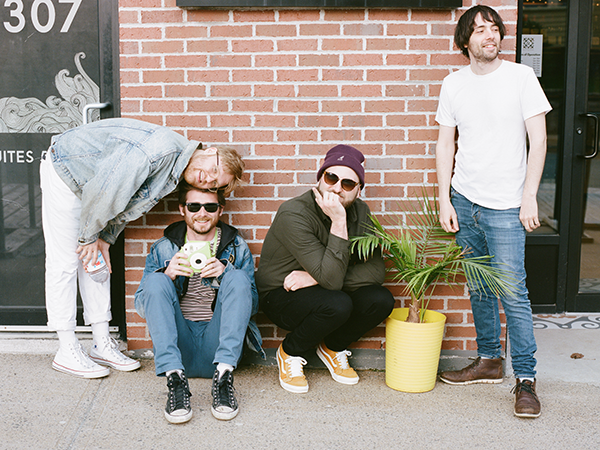 C ool To Who, the latest full-length album from local band Walrus, opens with a soft, electronic beat that blossoms into warm synths that recall Soft Bulletin-era Flaming Lips in their simple spaciness. "Feels good to breathe again," frontman Justin Murphy sings over and over as guitar lines appear out of nowhere and then disappear just as quickly, like shooting stars.

Despite the palpable relief of the chorus, its uplifting tilt, Murphy still sounds as isolated as a distant planet—and like he's just come out the other side of something that has left a permanent mark.

"I was definitely in a weary and restless place," Murphy says from the patio of a north end pub. "I'm in a new relationship now, and I was just in a weird spot when I wrote this album. Now I'm coming out the other side of that, in a much happier place, for sure. But it was tough, for sure. I just wasn't the best version of myself when I wrote it, living anxiously all the time."

If the song titles—"Bored to Death," "Mr. Insecure," and "Played Out"—weren't enough to tip you off, the lyrics will.

Walrus manage to sound bright and brash while Murphy sings and sighs his way through existential dilemmas, letting dreamy pop melodies and a heavy dose of jangle mask frustration, confusion, and anxiety.

Sometimes, as on the explosive "Played Out," with his voice crunched by distortion and surrounded by buzzsaw guitars, it almost sounds like Murphy might wash away into the uproar.

"When I wrote a lot of the songs, I'd write them when we were back from being on tour for like a month," Murphy says. "That'd be a good time to write songs. And I was just so far removed from my relationships with my friends. When you go away on tour, the life you have here doesn't stop. You come back and you're trying to reconnect with people you're used to seeing—'Oh yeah, I was just gone for two months. I'm back now!' You just feel so lost from your friends, because everything is still happening while you're gone."

Home sounds like a place fraught with uneasiness most notably on "Bored to Death," a bit of a kiss-off to certain Halifax bands, which features Cool To Who's funniest, most cutting line: "Throw me off the bridge before I start to sing about it."

But Walrus' relentless touring—they're banned from Avis Rental Car for being a "high-kilometre risk"—might've been the greater of two evils. The dizzying gait of "Half Smoke" gets to the heart of the matter, laying out tour life in stark and exhausted terms. So home, for now, is proving to be rejuvenating. Life here keeps going, but Murphy is keeping up.

"Oh, I'm in a great place," Murphy says about his current situation. "I've got a new girlfriend. I'm super happy. I've gotta go take our dog to the vet for a check-up."