Animated documentary provides a window to the dark truths of human conflict.

Documentarian/animator Ari Floman is being applauded simply for marrying the mercurial genre of animation with the fact-driven impulses of documentary, and deservedly so. In the film Floman interviews old friends about their shared experiences as part of the Israeli incursion into Lebanon in 1982. Floman can't remember whole days of the operation, while others are haunted by fever dreams, related to what they witnessed/participated in. The animation allows for the story to impact on far more subtle and powerful levels than a straight documentary retelling or dramatized account. In some respects, the nightmarish, hallucinatory quality of mixing animated dreams, part-memories and first-person accounts provides a window to the dark truths of human conflict, not a far cry from the impact of Francis Coppola's Apocalypse Now. But expect the brutal, non-animated news footage that ends the film to deliver a final message that while everyone suffers in war---including the men with guns who live long enough to tell their stories---it's the civilians that get the worst of it. Monday, March 16 at Empire Park Lane, $10.

Waltz With Bashir is not showing in any theaters in the area. 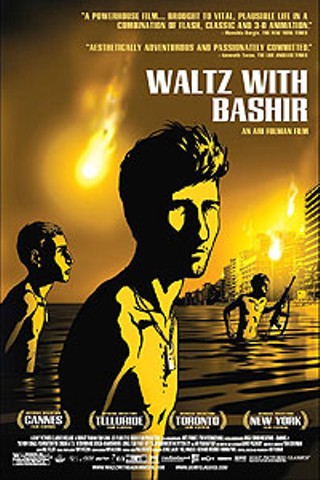