Three-year agreement with HRM for temporary facility is still being finalized, and dependent on the Canadian Premier League’s unknown launch date. 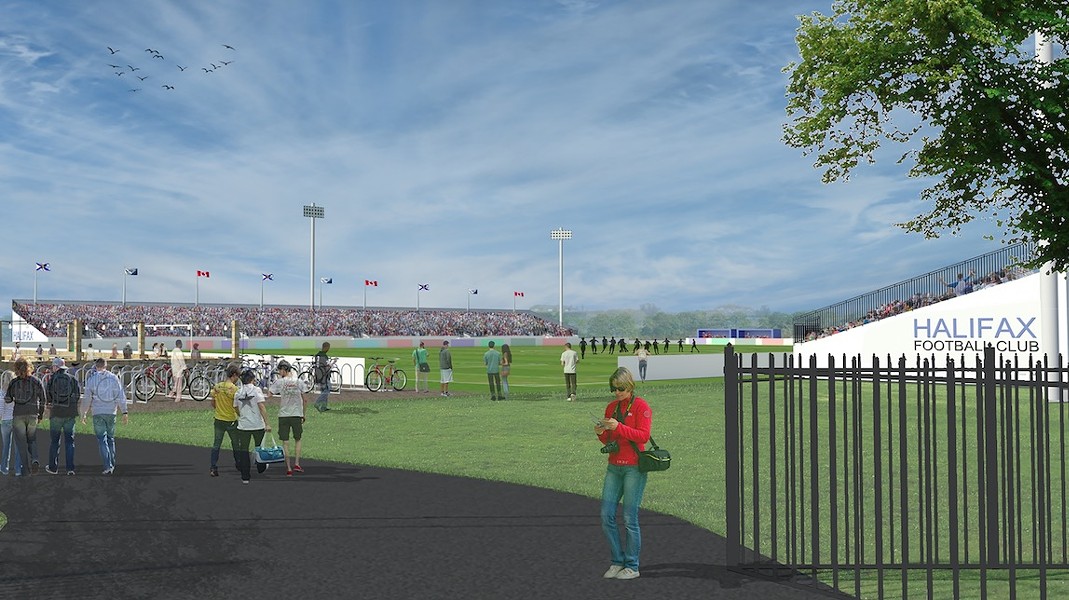 The kick-off for a soccer stadium on the Halifax Common won’t be happening as early as organizers had hoped.

This past spring, Regional Council approved by unanimous vote a proposal for a new “temporary” sports stadium on the Wanderers Grounds. The tentative timeline marked this past September as the opening month for test events, but now it appears the 7,000-seat stadium might not be ready until as late as spring 2019.

“We didn’t want to push things for this fall and rush and then perhaps not do things in the right way,” says Sports & Entertainment Atlantic president Derek Martin.

The project was pitched by SEA as a three-year pilot, with a two-year renewal option, to attract a potential Halifax soccer team in the new Canadian Premier League. But the clock hasn’t started ticking yet, says Martin. The agreement between SEA and HRM will need to be finalized over the next several months.

The field, located at the foot of Citadel Hill, was resurfaced by the city this summer. It will continue to be maintained by and booked through HRM, but the new stadium won’t have any municipal funding. It’s all financed privately.

To open in 2018, those investors will need the promise of revenue from ticket sales, says Martin.

“We have to get enough to justify the expense of building it. Are there events taking place that would sell enough tickets to fill the seats?” The CPL estimates a Halifax team could draw thousands of spectators for 15-20 games each season, and the local community will be able to use the field for other events like rugby and high school football once the stadium is built. If it proves successful, a more permanent set of bleachers could be considered, says area councillor Waye Mason.

“I think some of the uses that leave divots like rugby may get moved to a field on the Common,” says Mason. “But I’m hoping to see a field upgrade across from Citadel High for rugby and football.”

But there’s another problem: Neither the Canadian Premier League nor the Halifax team actually yet.

Speaking at a recent Footy Talks event in Toronto, CPL president Paul Bierne stated an official CPL announcement would happen by the end of the year. A grand opening date for the Wanderers stadium will in all likelihood closely follow the CPL’s, says Martin.

So far only Winnipeg and Hamilton appear to have confirmed teams in the CPL. The league says it’s had serious proposals from 10 cities, but only a few of those cases have featured any publicly announced planning. By summer 2018, following the FIFA World Cup, the CPL hopes to have the six teams it’ll need to play a season, including one in Halifax.

“They’ll only launch with six teams if they know what the next two are going to be,” says James Covey, a member of the Halifax Wanderers Support Group—the unofficial-as-of-yet fan club of Halifax’s future team.

Covey doesn’t seem dismayed by the delays; he understands work is being done behind the scenes. In the meantime, the stadium plans between HRM and SAE sit on the sidelines, waiting.

“We can’t start our contract or invest in stadium seating with no chance to offset that,” says Martin. “So we’ll have to be careful about when we initially build and start the
contract.”


———
UPDATED Disclaimer: We previously, incorrectly stated that Ticket Halifax, which is owned by The Coast, was a ticketing partner with SEA. This is incorrect. Editorial regrets the error. The Ticket Halifax sales team and operators had no involvement in the commissioning or editing of this article.