Some things are more important than sports. 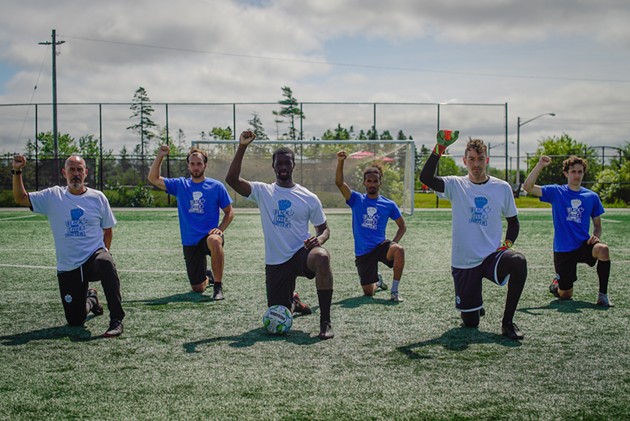 Last week, in the middle of a Thursday afternoon game between Cavalry and Ottawa FC on a field in PEI, the referee blew a whistle.

It was eight minutes and 46 seconds into the game, the same length of time a police officer kneeled on George Floyd’s neck—killing him and sparking the most recent wave of worldwide Black Lives Matter protests.

“Obviously there’s things that are much more important than sports in general, in life,” says Wanderers’ defender Peter Schaale.

Beginning on August 26, teams including the Milwaukee Bucks began a boycott of the league after the shooting of Jacob Blake in nearby Kenosha, Wisconsin. Although the boycott has since ended, the Wanderers say they felt inspired to do something too.

“Even though we are just on this tiny pitch and there’s no one watching us physically, we know there are a lot of people watching across the world, and that’s why we wanted to make some sort of impact and use that platform to show that we don’t accept any behaviour like this in this league,” says Schaale over the phone from the CPL’s bubble in Charlottetown, PEI.

The game was halted for several minutes while players and staff from all eight teams took a knee, both on the pitch and the sidelines.

“It was quite powerful to be honest,” says Schaale. “Especially because we were supposed to, we can’t be mingling and anything like this, but it seemed like it didn’t really matter in that moment because all of the players were pretty much on the pitch and in that small area because we wanted to make our statement.”

The German-born player, who’s in his second season with the Wanderers, says the idea came from the players themselves after a meeting held by team captains.

“We got together with some of the players and talked about it obviously. The league said they would support us in anything we want to do, they were obviously, I wouldn’t say afraid but they were concerned that we’d maybe boycott as well,” says Schaale.

But the CPL teams didn’t boycott. Chrisnovic N’sa, also in his second year with the Wanderers, says the players wanted to voice their support for BLM in their own way. 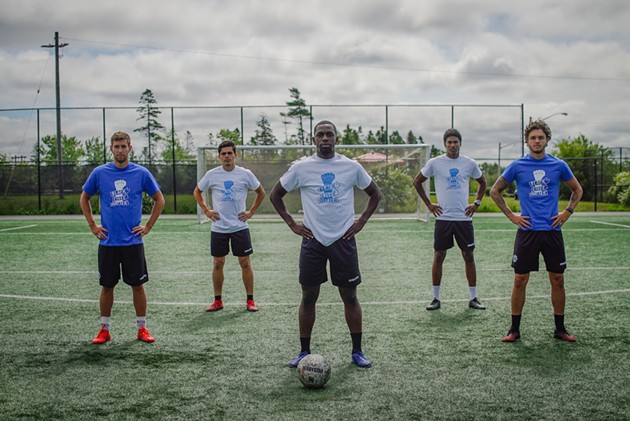 “I think we didn’t do it because we didn’t want to be the people who are just following. We wanted to do something our way that would be different but also would impact the situation. I think that’s why we did that and didn’t cancel the games,” he says.

N’sa, a Black man originally from Montreal, says that even as a Canadian league, it was important for the CPL to voice their support for what’s often seen as a predominantly American issue. “The things that happen in the USA also touch us here in Canada, so we need to try to find something to do,” he says.

On all the CPL teams, N’sa says there are outspoken advocates who are educating the rest of the team about the ongoing issues.

“I think all the teams have players that are fighting for this cause, for Black Lives Matter, and that’s talking to the rest of the team that’s make them also supporting them and fighting them,” he explains.

For the Wanderers, both N’sa and Schaale say the Wanderers’ inclusivity officer, Marvin Okello has been instrumental in opening their eyes, helping the team understand the importance of fighting racism.

“He definitely plays a big role in just spreading awareness and giving us examples of how to fight against it,” Schaale says.

Schaale says educating people within his circle is important to him, especially as a professional athlete who has a fair bit of influence.

“You have to actively promote like anti-racism to be part of this movement, it’s not just enough to say 'oh I’m not racist so it’ll be fine.' I think that’s what people have to understand and that’s what we have to try to put out there as well,” he adds. (As of yet, the CPL has no official anti-racism training.)

The Wanderers have also announced a partnership with local clothing company Creations by Kyy, selling t-shirts out of their Quinpool Road store with the BLM fist, another initiative led by Okello.

“I’ve had many issues of racism in my life as a Black person that have been swept under the rug in the past and what happened to George Floyd has motivated me to really stand up and try to make a difference for all of us,” Okello said in a release from the Wanderers last month.

For N’sa, last week’s moment was a moment of shift in the league.

“For real it was something big. Because we see people that we used to fight against them on the field, and once this moment happened, we were like no fighting right now, all together we are fighting against this thing that’s happening in our life,” he says. “I think it’s a moment that we’re going to remember for sure.”