War is not the answer 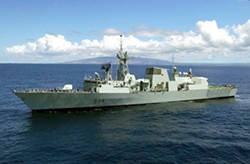 In last week's Coast, freelancer Mairin Prentiss has an article examining the "Ships Start Here" PR campaign. This gives me the excuse to express my reservations about not just the PR campaign, but the ship building contract itself.

First, some background. There are actually two ship building contracts at play, as detailed on the federal government's National Shipbuilding Procurement Strategy page.

One contract, for $25 billion, is for straight-up warships:

The second contract, for about $10 billion, is for boats for the Department of Fisheries and Oceans and the Coast Guard. They are:

• An Offshore Oceanographic Science Vessel, which is a replacement for the very old (built 1963) CCGS Hudson, based out of BIO in Dartmouth.
• Three Offshore Fisheries Science Vessels, which will replace four boats now in use for scientific research.
• One Polar Icebreaker.