The province’s largest indie grape grower, Warner Vineyards, is growing the industry, one vine at a time. 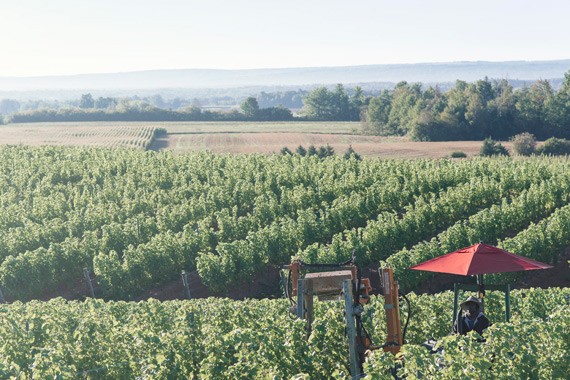 It’s been a dry summer. As John and Anne Warner walk around their vineyards, the grass crunches underfoot like gravel. Leaves and fields are tinged with yellow and dust picks up on the country roads with each breeze. Cereal crops planted in between the grape trellises struggle to make their way through the cracked dirt. “We had a full moon last night,” says John Warner. “Fifteen or 20 years ago, we might have been hit with frost with that full moon. But now we seem to have the temperatures and the heat to take us through those early issues. Now we tend to hang the grapes until the end of October.”

Against the odds and the unquestionable negatives, global warming has had a positive affect on the wine industry. “It’s allowing us to grow varieties that we couldn’t grow 15 years ago,” says Warner. This is just one of the many things that have changed since the Warners started their vineyard.

Warner Vineyards is a family-run operation. John Warner’s parents, Jim and Edie Warner, purchased the farm property in 1990, eventually passing down the day-to-day management of the operation to their son and his wife, Anne. They started with just three acres, adding another three each year for the past 25 years. Now Warner Vineyards is the largest independent grower in the province. Nova Scotia boasts over 800 acres of vines, and almost one in 10 acres of grapes are on the Warner farm. If you’ve had Nova Scotia wine, chances are you’ve tasted their grapes: They sell to wineries like Jost, Gaspereau, Grand Pré, Avondale and Benjamin Bridge.

“You know, 25 years ago the wine industry existed, right, but it was definitely not to the extent it is now. We just thought it was a promising commodity to get involved with,” Warner says. “We started slow and over the past 25 years, just about every year, we would plant a small planting just to see if we liked certain varieties. Now we’re at almost 75 acres of wine grapes.”

What sets Warner apart from the major growers in the province is the fact that he isn’t connected to one specific winery. As an independent grower, he is helping to build a more general infrastructure that supports the growth of the entire industry.

“There is not a glut of grapes,” says Gina Haverstock, winemaker at Gaspereau Vineyards, which uses Warner’s grapes for several of its blends, like its Riesling and their Seyval Blanc. “Grapes are something that are sought after right now, so independent growers are a good thing. We use them to supplement our own.”

“John just knows his stuff,” she says. “He figures out what’s right for his land, he asks people’s opinions, he is well read and researches. It’s great to work with someone else who is passionate about wine; it makes things easier. He wants his product to be as perfect I do.” Warner has enjoyed seeing the massive growth of wineries like Gaspereau, Jost, and Benjamin Bridge. "They see expansion in their future, which is very encouraging from a grower’s perspective.” Also encouraging is the government’s ongoing promotion of and investment in the industry. Last year, premier Stephen McNeil announced the $1 million Vineyard Development and Expansion Program, a funding program that aims to assist small growers, with the intent of doubling the province’s grape acreage over a five-year period. “All of this stimulates and promotes the growth of the industry as a team, which is very important,” he says.

The Warner vineyard sits at the leafy base of the North Mountain in the Annapolis Valley, just outside of Kentville. The vines stretch out—not just for metres, but kilometres—shooting out in loose lines, filed into prim phalanxes that, from above, are laid out with Spartan precision. There’s anarchy close up, though, as bundles of grapes dangle at the bottoms of the trellises where the leaves have been pried off, giving the sun warm permission to beat down and coax the berries into dusty yellows, translucent greens and bruised purples.

"It’s great to work with someone else who is passionate about wine; it makes things easier. He wants his product to be as perfect I do.” —Gina Haverstock, Gaspereau Vineyards tweet this

Walking around the vineyard, Warner gestures, coffee cup in hand, to the different types of grapes. “You can see the little clusters there. Any clusters that are low like that, the pheasants will come in. That’s why we generally trellis them a little bit higher,” he says. He points out the flattened grass around the perimeter of the fields, behind a short electrical fence that sits like a trip wire in a Rambo movie, primed to keep fat-bellied raccoons out. It turns out that as much as raccoons like to climb into garbage cans, they won’t hop fences.

Each tiny grape Warner plucks off a vine has its own deep flavour, sometimes bubble-gummy, sometimes jammy, sometimes tinged with a slight spice. Thin branches of Riesling, planted last year, stand flimsily next to ropey stalks of L’Acadie Blanc that have been growing for almost a decade. “We started planting from over there,” Warner says, gesturing across the field, over dozens of trellises, “and worked our way over. The vines get younger and younger as we go.”

Most of the grape vines that growers in Nova Scotia are planting are from certified nurseries in Ontario. “It depends on what the grower is after,” says Warner. “Some of the growers are propagating the vines themselves.”

Warner grabs the tendril of a nearby vine that has weaved its way slightly out of the trellis. “Just to give you an idea of how easy it is to propagate a grape vine: what they’ll do is during the winter months is they’d probably cut that, right there,” he says, bending a shoot at one of the nodes. “They’ll probably cut it to maybe a foot in length and they’ll simply plant this lower end in peat moss or into soil and it’ll begin to root. It’s not difficult.”

As a grower who sells exclusively to wineries, the varieties he plants are somewhat of a joint decision with the wineries he works with. “A grower knows what they can and cannot grow on their site,” he says. “But there’s always communication between the grower and the winery in terms of what to grow on your site. It’s important.”

“We like to stay in contact throughout the growing season,” says Haverstock. “Sometimes you want to check in, and with John he’s always on top of everything and is great to discuss things with. He can walk you through any questions, but doesn’t tell you what is right or wrong. He has this huge operation, but never says ‘I wouldn’t do that,’ instead simply offers up ‘I might do it this way.’” The closer they get to harvest, the more the winemakers get involved, testing grapes, looking for specific parameters. “Healthy grapes with a balance between acidity and sweetness,” says Haverstock. But with a proven grower like Warner it’s an easy process. “You just make a plan, get a sense of the crop and watch the health. It’s just an open conversation.”

The regular harvest is usually finished by the first week of November. Ice wine is harvested later, in December and sometimes early January. This year’s hot dry summer may have advanced the regular schedule by a couple of weeks. Some of the grapes are already being harvested. “This is very early. I would say we’re approaching two weeks earlier than a typical year. Just from the heat and the dryness,” says Warner, standing next to dusky bunches of Castel grapes. “We’re going to be able to have some really ripe reds and whites for the wineries. The red wines will probably be much softer and the whites will probably have some really intense flavours and aromatics.”

“Oh yeah,” says Warner as he looks out over the vineyard in the hot summer sun. “It’s going to be a spectacular year. No question.”

Slideshow A morning at Warner Vineyards