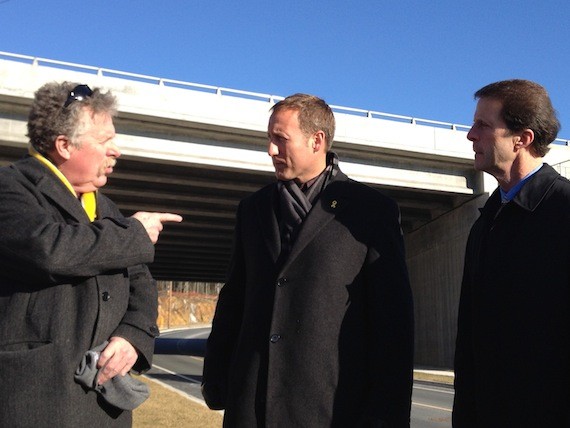 The three probably have a dozen PR reps between them, and yet it was collectively decided that it was a good idea to draw attention to the scandal-plagued, over-budget project that violates at least the spirit of the city's regional plan, which calls for a slowing-down of suburban sprawl in places like Bayers Lake.

The underpass project originated in a disgusting power play in which the federal Conservatives and their provincial brethren didn't even try to put a fig leaf over their dicking around with taxpayer funds. As I explained in detail back in 2009, for brazen political purposes, the Harper government rejected the city's request to use economic stimulus funds for the four-pad arena in Bedford. The Conservatives then cherry-picked items to fund from the city's 25-year capital project list, apparently basing their decision on how the funding would play in expected federal elections---funding for sidewalks on the NDP-held peninsula was out, funding for sidewalks in Sheet Harbour, the one bit of HRM in MacKay's district, was in.

The Washmill underpass project was way down the list of potential city projects---city bureaucrats told me they thought it might be necessary in 20 years--- but the site is in the federal Halifax West riding, which the Conservatives thought they could take from the Liberals by running Peter Kelly as candidate, and so it was funded. (Kelly was abruptly dropped from consideration just before the 2011 elections, when he became embroiled in the concert scandal.)

No one had made any coherent cost projections for the Washmill project, beyond just a ballpark figure of $10 million, but that's the price tag that stimulus funding was pegged at. One-third of the $10 million was to come from the federal government, one-third from the provincial government and one-third from the city. But, crucially, all cost overruns were to be borne by the city.

And boy howdy were there cost overruns. In a remarkable piece of impropriety, former CAO Dan English failed to tell city council that the project was some $8 million over-budget, and secretly approved an $8.1 million contract that left the underpass only half-complete. Then, English's successor, Wayne Anstey, kept the cost overrun from council for another six months, putting councillors in something of a pickle last spring: they could either refuse to fund the completion of an underpass, and lose the federal and provincial match, or they could pony up the extra dough, throwing good money after bad, to get the finished project. They chose the latter.

At the site today, MacKay, Estabrooks and Kelly posed and smiled, made small talk with each other, while the obliging media took pics. "Any questions?" asked Kelly, and none of the assembled media said a word... well, except me. My questions and the responses are here:

Washmill
Update Required To play the media you will need to either update your browser to a recent version or update your Flash plugin.

Unfortunately, the first few seconds of the audio are garbled as I pull my recorder out of my pocket. I ask the question about cost-overruns, and Estabrooks is the first responder; I then direct the question to Kelly.