Watching the ships roll in 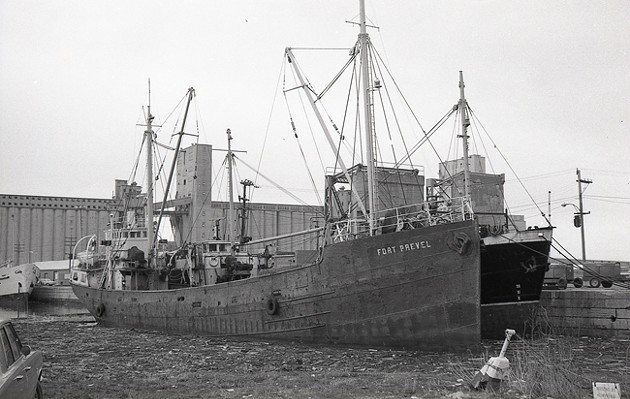 Mac Mackay has been taking photographs of the ships in Halifax Harbour for the last 51 years. Some of those photos can now be seen at a new exhibit in the Nova Scotia Archives. Other photos and harbour news can be found on Mackay's Shipfax blog. Recently he shared some of his favourite images with The Coast and spoke about the most memorable scenes he's been witness to in five decades of watching the waterfront. His answers have been edited for length and style.

Why did you start taking photographs of the ships in the harbour?

I was interested in ships, and I was aware vaguely that they weren't going to be around forever. Some of the ones I saw were being broken up. I thought maybe nobody else has a record of this, I should record it. About 1969, I got a 35mm camera and realized that I could really take some fairly good quality pictures. I've always been interested in the ships and kept record of the ships. It just kind of was a branch of that interest.

How many photos have you taken?

Where do you keep them all?

Well, that was the thing with the black and white. I never printed them, I just had the negatives in sleeves. I never had prints for the most part, because I couldn't afford it. Of course, now that we've gone digital I've just gone crazy with the number of pictures I have because they don't cost anything. Yeah, I have quite a bit of space occupied in my house with this stuff.

In the time you've been taking photos, how has the waterfront changed?

Oh, it's hardly recognizable. When I first came to Halifax there were fish plants wall-to-wall, tug docks, kind of abandoned old wharves that had brought in salt to salt down fish. There wasn't really anywhere on the waterfront you'd really want to go, particularly from say Historic Properties south right down to Pier 21. There really wasn't any place in there that was people-friendly. It was considered to be pretty dangerous, in fact, and there were some seedy dives and all-night bars, all-night restaurants there. And then the big deep-sea piers, they were all open to the public. You could wander out onto those piers, you could walk onto the ships. Nobody stopped you. If a ship's crew didn't like you, they'd kick you off, but sometimes they'd just invite you in for a cup of coffee. It was just a totally different sort of place.

What's the most memorable scene you watched?

One of them is the picture I have in my exhibition of a ship that was docking and the wind gust caught a hold of it and it started to crush a tugboat against the dock. They were very, very lucky to survive. The propeller was thrashing around and came very close to cutting into the tug. I just happened to be standing at the front of the Mission to Seafarers, and saw this all kind of unfolding and there wasn't really anything I could do to help or stop it. So I forced myself to take pictures. I'm not a journalist, I'm a guy who visits war zones and takes pictures of things. I'm just an ordinary guy. So it took a tremendous kind of discipline to squeeze off the pictures, because I expected a fatal outcome.