We bought a church 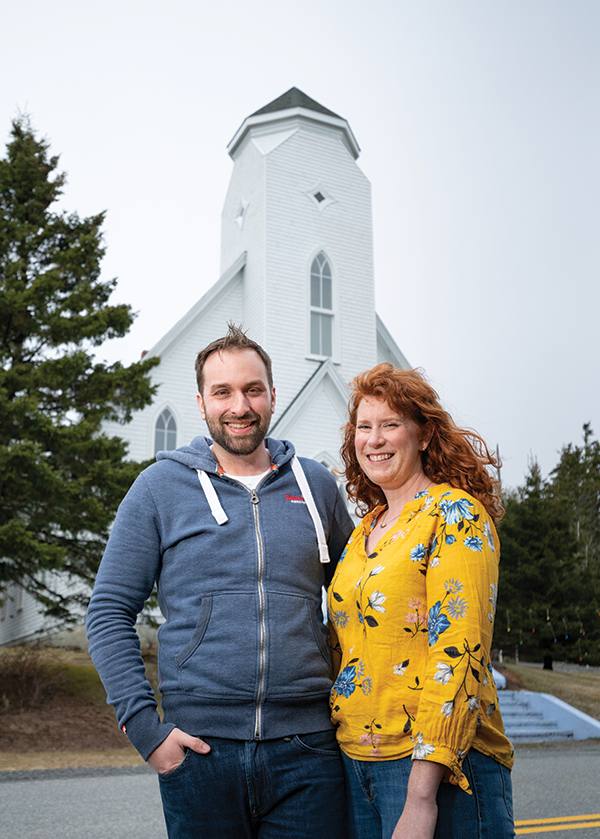 Visiting Musquodoboit Harbour, Jennifer Wilcox and Josh Boyter drove by the decommissioned West Jeddore United Baptist Church. "Wouldn't that be nice if it was converted?" they said to each other. "What we didn't know was that it already was," says Wilcox

On a later visit, they noticed a for-sale sign. And that weekend, "we impulse-bought a church," says Wilcox, laughing.

It's a far cry from their original plan to buy a small fixer-upper on the Halifax peninsula. "Owning something with a steeple was not on our radar at all," Wilcox says of their first home. They call it Church House.

The couple's favourite room is the spot where the pews used to be. It's now their open-concept living room and kitchen. The giant church windows make for spectacular sunrises. "When the morning light's coming through the windows, it's quite beautiful," says Boyter. The cats all find a spot in the sun and the pellet stove keeps everything warm.

Compared to other homes, "everything's a lot higher," says Boyter. They need a 12-foot step-ladder and a 20-foot pole just to dust the ceiling fans. They need a 32-foot ladder to get up into the attic. The heating bill isn't as fearsome as you might think: "It's heated by oil and pellet, and the most expensive is generally around $360 to $380 a month for heat in the winter," says Wilcox.

She and Boyter say the biggest challenge of owning an alternative home is keeping on top of it, literally. Fixing the roof requires a boom truck, and small jobs can become big expensive problems if they aren't addressed quickly. "Our maintenance budget for the future is very high," says Wilcox. To save money for maintenance, they buy almost everything second-hand. "Our house has been decorated by auctions and yard sales," says Boyter.

The pair loves the fact that the Church House a longstanding community nexus. One neighbour's ancestors donated the land the church was built on in 1885. Another neighbour had one of the church's last weddings. The grandson of one of the last Baptist ministers of the church even lives nearby. "It's not just our house, it's a house that has a lot of history for the community," says Wilcox.

Sometimes that history causes problems. The church is so interesting that they get lots of looky-loos stopping their cars and wandering around the property taking photos. Some people want more. "I had someone argue with me that it was a functioning church and that I should let her in—meanwhile, our laundry was on the line," says Wilcox.

She and Boyter agree Church House is their forever home. They recommend to potential home-buyers to embrace the adventure. "Buy with your heart a little bit," says Wilcox. "It's not all about your head."

The adventure continues for the couple: "We bought the wedding venue," says Wilcox with a laugh. They'll be married in the Church House this summer.