We love the frontline healthcare workers taking on the pandemic

Janvier Korongo was the first volunteer for disinfection duty: "They thought I was joking." 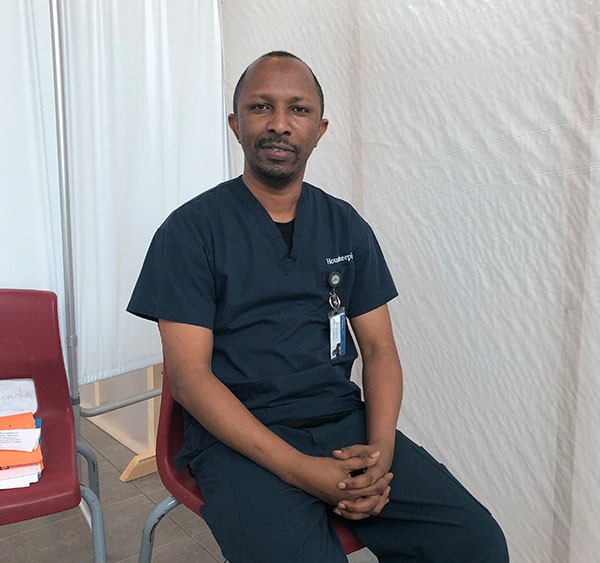 For leading Nova Scotia through a particularly brutal first wave of COVID-19, premier Stephen McNeil and chief medical officer of health Robert Strang earned heaps of praise in the BOH survey. "Even though I am not a Liberal government supporter," said a typical comment, "I think the premier and Dr. Strang have done a fantastic job."

But as McNeil and Strang would be the first to say, they didn't win that fight alone. Every time Strang says to call 811 about your symptoms, a frontline healthcare worker answers the phone. When you need to be tested, a frontline worker is holding the swab. And if you wonder how a hospital avoids becoming a coronavirus breeding ground, a frontliner like Janvier Korongo is way ahead of you.

Korongo, now 37 years old, is originally from Congo. There he experienced war, which killed his parents and forced him to flee his home. And the threat of disease—highly lethal ebola. And while living in a refugee camp in Uganda, he acutely felt what it means to have a corrupt government that cares little about the weakest people in its society.

After more than 10 years in the refugee camp, he was able to immigrate to Halifax in 2016. He went to school and in 2018 took a job in housekeeping at the QE2 Health Sciences Centre. Then last February, the hospital asked for volunteers to deal with disinfecting medical areas around C19 patients. Korongo accepted immediately, the first to step forward.

"They thought I was joking," he says, but he was being realistic. Supporting his sister and her seven kids, who live in Rwanda, Korongo needs opportunities to work. Plus he feels a duty to help—protecting people from the disease suits him well. "If you get it out there," he says, gesturing toward the world beyond the testing clinic where he's currently assigned, "that's fine. My project every day is to make sure you do not get it here."

Selected answers to the question: Is there anything you'd like to say to workers in hospitals and nursing homes? You are all amazing human beings, saying thanks will never be enough for what you've done for us. » You guys should work half the hours for double the pay. » It's a scary-enough world as an average citizen—what you do every day is unimaginable. Thank you so very much. » Thank you thank you thank you for giving selflessly. »  You deserve better from a provincial government that will hold you up as "heroes" in press releases but treat you as an enemy to squash when it comes to labour rights. »  Thank you for all you do, we love, respect and appreciate you. »  Thank you, you rock!