We love that Halifax got baked 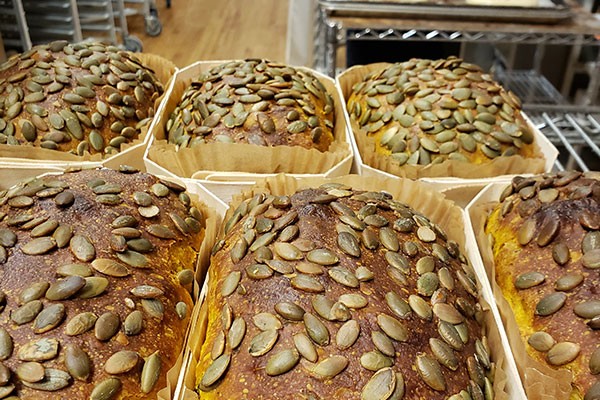 In the early days of the pandemic, Halifax was uncertain about lockdowns, scared of new cases and worried about job security. But one thing it could count on? Carbs.

Bakers (and would-be bakers) trekked to the grocery store to snap up the last packets of yeast and flour from near-bare shelves. They waited for loaves to rise, ovens to pre-heat, crusts to form.

On Gottingen Street, similar things were happening at LF Bakery. "Bread is a necessity," says manager Ludovic Eveno. "We managed to never close."

Eveno, who's originally from France, says LF staff paid close attention to the news in Europe, where the pandemic progressed earlier than Canada. "I picked up the news of what's happening, I had an idea of what was going on, 'cause they were on a very crazy lockdown over there," Eveno tells The Coast.

The bakery installed six-foot physical distancing tape markers on the floor and pre-ordered plexiglass for its counter before it was recommended by public health. It had to stop eat-in coffee service to keep folks from lingering in the shop, and lost its wholesale business as restaurants were forced to shut down, but the bakery never stopped churning out loaves.

"Many people were very grateful. Some people would go and quarantine and don't go out, and then after their 14 days, that's the first coffee, or first croissant or first bread," says Eveno. Our BOH survey responders agreed, praising LF specifically for staying open, as well as shouting-out the comforting power of baked goods in general: "I guess bread was just important."

In the early days of the pandemic, many customers were just happy to have human contact. "For a long time, we were basically the only place you could go to have a conversation with someone. All the shops were closed," Eveno says. "People would be emotional just to be able to talk to one of the staff members."

He even remembers people coming in saying, "I'm just here to get some good bread because my boyfriend or girlfriend or partner has been making sourdough, or trying to make sourdough at home, and it wasn't up to the standard."

The bakery now serves up to 500 customers a day between take-out, Uber Eats and three small tables inside the cafe. Its 12 staff work round the clock, and not one person had to be laid off.

While the future is uncertain, after talking to family members facing the second wave in France, Eveno is glad to be in Halifax. "That's what keeps us going. Even now, we have it very good here, and that's what I say to people who complain. If it's just a matter of wearing a mask for another six months, at least we don't have to close our business."