A primer on Mi’kmaq history and culture for new residents of K’jipuktuk. 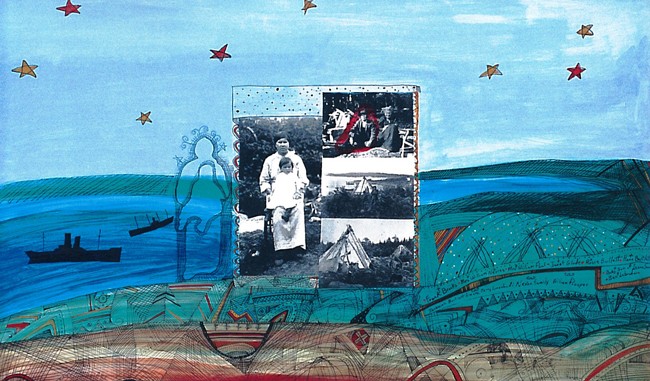 The Indigenous people of this land call Mi’kmaq (from , “my kin;” originally L’nu, “the people”). While some celebrate Canada 150, the Algonquian-speaking Mi’kmaq people have been on this land for over 13,000 years.

Although pre-colonial Mi’kmaq had no written language, evidence of their history is found in petroglyphs. These petroglyphs, called Komqwejwi’kasikl (“sucker-fish writing’), are prominent in Kejimkujik and Bedford (Kwipek).

Traditionally, Mi’kmaw territory is referred to as Mi’kma’ki, and has seven subdivisions: Sipekne’katik (Wild Potato Area), Sikniktewaq (Drainage Area), Unama’kik (Land of the Fog), Kespukwitk (Last Flow), Kespe’kewaq (The Last Land), Eski’kewaq (Skin Dressers Territory) and Epekwitk Piktuk (Laying in the Water and Where Explosions are Made). or K’jipuktuk (The Great Harbour) is part of Eski’kewaq. As a result of populating former Beothuk territory, in the 1800s an eighth district was added, Taqamgug, which covers all of Newfoundland.

Districts would govern themselves through councils made of band chiefs and elders, and each district would elect a Sagmaw (Chief) to represent them at Santé Mawiómi (Grand Council) in Unama’kik.

Membertou was the Grand Chief during the early colonial era. He met Jacques Cartier in 1534 and was eventually baptised with the name Henri. This began a largely friendly relationship with the Acadians and a long history of intermarriage between the two communities. Unfortunately, European contact would eventually lead to a decline of, in some areas, 90 percent of the Mi’kmaw population.

In alliance with Alnôbak, Panawahpskek, Wolastoqiyik and Peskotomuhkati peoples, Wabenaki (People of the First Light) was formed; its land is Wabanahkik (Dawnland). The of nations brought allies in the Innu and Wyandot. lasted as a political entity for over 250 years and was reconstituted in 1993.

It engaged in wars supporting France against the British, finally fighting on its own terms in The Dummer's War in 1722. The 1725 Dummer’s Treaty acknowledged Mi’kmaw sovereignty and right to land ownership.

In direct violation to this, the City of Halifax was founded on Mi’kmaw land in 1749. Colonial governor Edward Cornwallis declared a bounty on Mi’kmaq, alive or dead. A second scalping proclamation made in 1756 still exists today. Cornwallis’ statue remains in downtown Halifax, and his name still adorns a street in the north end.

The Indian Act, passed in 1876, defines how the settler government interacts with Indigenous peoples, controlling operations of reserves and who is considered an “Indian” with the eventual goal that Indigenous people will give up their culture for a European lifestyle.

Furthering the cultural genocide was the Residential School system. Funded through the Department of Indian Affairs and the Catholic Church, the Indian Residential School was founded by the Sisters of Charity—the same organization that would found Mount Saint Vincent University. Ten percent of all Mi'kmaw children would attend the school during its 37 years of operation and be subject to abuse.

The Halifax Explosion is a benchmark in Nova Scotian history for all its residents, but no efforts were made to rebuild the Mi’kmaw community of Turtle Grove on the eastern side of the harbour. The community’s residents had been the subject of attempted forced relocation prior to the explosion. Survivors were placed in a racially segregated shelter and scattered across the province for resettlement.

On the feel-good side of history, Mi’kmaq contributed to the invention of modern hockey. The oldest Mi’kmaw stick was from 1852 and was recently appraised for $4 million. Between 1900-1909, Mi’kmaq-designed hockey sticks were the most popular in Canada.

Today, the Mi’kmaq language is in the midst of a revival, and the struggle for government policy consultation is making strides. Some areas of Mi’kma’ki still struggle with unclean drinking water, access to public services and persistent discrimination. Indigenous people make up a disproportionate percentage of the prison population and are more likely to experience violence and crime.

Back To School Back to School Indigenous History Mi’kmaq