The pure spectacle of the season 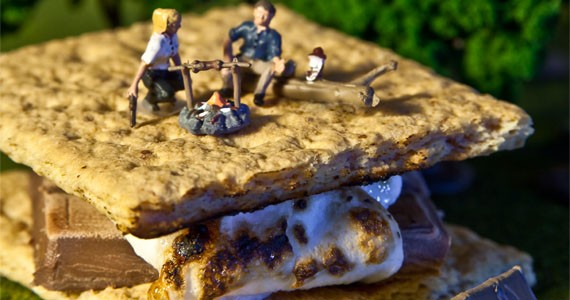 There's something about summer.

Even if you are not an enthusiast of this specific season (cough), there's a certain undeniability about its aura, its images, what it evokes and inspires. No other three-month period makes you rewatch movies that take place within it specifically because they do, nor would you ever say in February "Let's pack up the car, drive to Montreal and stand in an appropriated national park for three days and watch bands." You would not, at 1pm on any Friday in the spring, walk out of your office, leaving a "Gone to the beach!" sign behind. You would not spend a November evening sitting on a porch, digging beers out of a cooler past midnight, not worrying about that 8am dentist appointment tomorrow. You wouldn't happily dig in the ground all day on any Saturday in March. You do not search for kebob recipes at Christmas.

No other time of year makes you look back with dusk-lit longing at nights, loves, fires and drinks gone by with such an acute sense of nostalgia, either. Late summer of 2010, jammed full of a hurricane, a heat wave and a rash of swarmings? All we remember now is the communal meal we had in the dark that night, the 2am bike rides to Video Difference and the cool morning air coming through the window before the world heated up again.

Wes Anderson knows something about nostalgia, and his newest film, Moonrise Kingdom (it arrived June 15), is steeped in it---even for him. It takes place at a summer camp, following a pair of 12-year-olds in love, and "captures the texture of childhood summers, the sense of having a limited amount of time in which to do unlimited things," writes Christopher Orr in a rapturous review in The Atlantic, in which he also calls this Anderson's best feature.

Even if you are not an enthusiast of this filmmaker (cough), his special attention to detail---the pure spectacle of the minute---is the great reward of seeing any of his films for the first time or the ninth time. It's in the clothes his characters wear---the iconic red Steve Zissou hat and Adidas or Luke Wilson's tennis sweats in The Royal Tenenbaums---and their immaculately arranged homes, their manner of speaking, the very way they carry themselves---aloof and wanting. In Moonrise, the kids read from non-existent children's books whose covers are so lovingly designed that the idea of actually writing the stories, just to be able to release the volumes, has been floated.

The spectacle of the minute---see an exceptional example of it in Krista Leger's intricate image, as seen above and on the June 21 Coast cover---is what summer is all about, really. Yes the days are longest but it's the tiny moments we steal from them, in which we step out of our daily lives to take a swim, bump "Call Me Crazy" or flip a burger. It's throwing a Frisbee on a Sunday afternoon, aiming an oscillating fan low so it hits the cat, watching the bats dance in front of the alFresco screen on the waterfront. It's choosing a sunscreen, it's picking your own berries, it's how you side-tuck your rolled-up jeans so you can walk in the water. It's killing the mosquito that's been buzzing past you in the dark for an hour. It's the smell of a new baseball glove. It's the wave of cold air that hits you walking into a movie theatre.

Summer: When the spectacle of the minute feels unlimited. --Tara Thorne