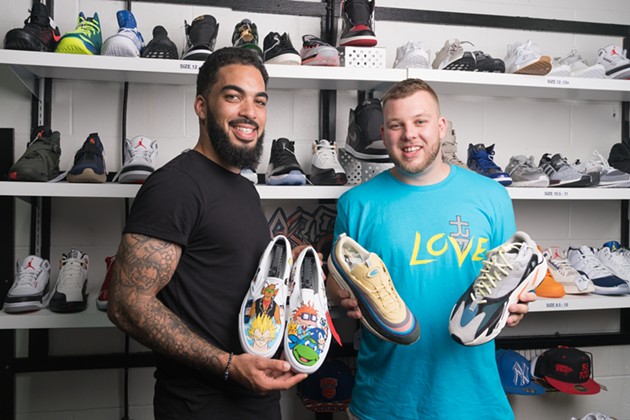 East Coast Kicks and Classic Soles want to make it easier to stay fresh in a pair of sneakers. Opening earlier this year, the two companies have been offering exclusive high-end kicks and sneaker cleaning, restoration and customization to Haligonian shoe enthusiasts, providing the ultimate one-stop-shop solution for all their footwear needs.

“We kind of knew of each other before,” says Connor. “I met Tyrone and saw him doing his cleanings and restorations—before then he wasn’t doing customs—so we decided to collaborate and get our own spot together, and the rest is history.”
Moving to West Street, the two entrepreneurs set up shop in January, situating their respective shops next to each other. Since then they’ve been running a successful operation with Connor keeping the shelves decked out with dope footwear brands (read: Yeezys, Nike x Off-White, Gucci) and Goodwin keeping patrons’ favourite shoes in tip-top condition.

“Some shoes don’t even release in Canada, most don’t release in Nova Scotia, and the only place to find them are shops in Montreal, Toronto and Vancouver,” says Connor of his exclusive finds. “And with Classic we offer the premium shoe cleaning, restoration and customization—we try to give the full experience at our store.”

While business is good at the moment, might be quick to bring up the sneaker shops that have come and gone in Halifax, but Connor says this shop is nothing like the rest.

“Most of those stores that are gone now were actually retail stores who bought directly from companies like Adidas,” he says. “Whereas with my shop, I buy what I want and I also offer consignment, so it gives people who want to sell their shoes a chance to use my platform and get themselves paid a lot faster than selling themselves.”

When it comes to their place in the sneaker fanatic culture, Connor says they hope to be a hub for customers looking to stay up on what’s hot and new: “We want to see people coming through and experiencing our shop, even if they’re not buying anything—just to experience it.”

The unique experience they offer is definitely paying off. Just nine months into setting up shop, Connor and Goodwin are preparing to relocate as their small 290 square-foot is literally stacked “floor to ceiling” with shoeboxes full of kicks waiting to be worn. With plans to find a new home on the peninsula and involving themselves in charity efforts like shoe drives, the dynamic duo is in for a massive undertaking, but promise keep the original spirit of their shops alive as they continue to grow.

“We’re not your typical mall type of store,” says Connor. “We just want to always be the place that people go to for the after-market sneaker world in Halifax as well as the shoe cleanings.”