What a Friend We Have 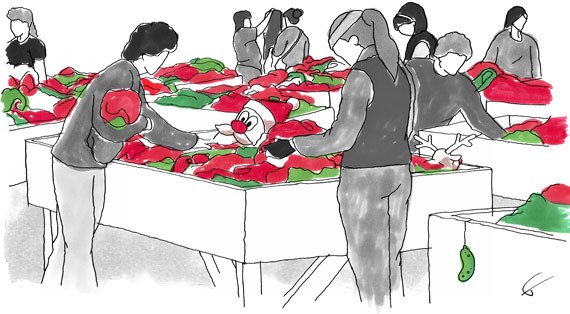 The Frenchy's bin overflowed with plushy Santas and reindeer, glittery balls and bows, and—as Gray dug deeper—gold! A green plastic pickle covered with sparklies, so ugly-ass it was fire. It had Ty all over it; she'd have slipped it into her pocket if cash lady hadn't been looking. She moved to a bin of socks with candy canes on them. The radio blasted Simm-ply haaa-ving a wonderful Christmastime, sleigh bells like a bag of quarters going shake shake shake.

She returned to the pickle, held it up. "How much?"

Forget it. Ty probably wouldn't even laugh. Anyways, she already had his present, from dude in the next apartment. A real nice guy. Sometimes she thought it wouldn't be such a bad idea to move in with him. She felt in her pocket. Dude was always giving her stuff while Ty was busy sleeping or playing N64. And he called her Melissa, which nobody had since grade five. Dude said they'd go out driving sometime, though so far his car hadn't left its spot.

So she walked. Walking was no big deal if you had nowhere special to go. She felt in her pocket again, closed her fingers around the tiny gift—it would suck to drop it, especially here. She felt for her money. "You can pay me later," dude had said. Maybe he'd like the pickle? He could hang it on the tree in his window.

She dug through the sweaters, found a purple shirt, girls' size something. Found a hoodie, just right, size zero, a skull on the front in gold glitter. Grazing men's t-shirts, she yanked up a black one with You Got My Back on it. Too perfect—why wouldn't she have Ty's back? He could be so sweet, going with her to buy food, for instance—except when he'd scammed the checkout with a fake coupon for chocolate milk. Dialing the manager, checkout bitch had given them both the finger.

Now the Frenchy's lady was watching, so Gray went up and paid, leaving with her bag of stuff. Outside, it was raining, slushy rain. As she passed the Canadian Tire cars went spitting by. Passing St. Jude's—its sign asking "Guess Who's Coming For Christmas?"—she heard singing. "What a friend we have...." She felt for the pill. It'd begun to burn a freaking hole in her pocket. She pictured Ty waking up. Maybe he'd make her hot chocolate. Just the thought...for a second she was Melissa trucking along in pink snow boots with a Hannah Montana backpack—back when Mom and them had given a shit and her biggest worry was what snack was for recess.

She closed her fist around the friend, let it dig into her palm. Maybe she'd wrap it in some toilet paper with a sticker from the junk mail. Maybe she'd find a tree and put it and Ty's t-shirt underneath? He might even put something there for her. A tree: There were woods behind St. Jude's, in behind the new townhouses—she'd seen baby Christmas trees, going back there a few times to party.

The townhouses were all lit up, though it wasn't dark yet. Airless Frosties lay like muddy blankets on people's lawns. She found the path. By now the rain was mushy snow, making everything so quiet she couldn't hear traffic anymore. She reached the clearing full of dead cars—cars that might've driven up and down the road when Mom was a kid. The snow sat like cake frosting on their rusted-out dashes and windshield frames, the woods so silent she imagined Mom sitting in one of them, with some guy, maybe, making out.

Now the pill burned a hole in her hand—what she really wanted was to stop and put it on her tongue, catch some snowflakes, tip her head back and feel it go down. She knew what it could do. "But it's for Ty, I'm keeping it for Ty," she said out loud. The friend was his present.

A tree would take her mind off herself?

She kept going—because of Ty, because a tree would make things perfect. She had a nail file on her to cut one down with, or she'd snap one off at the roots. Pulling her hand from her pocket, she bent to check one out, touched the trunk: Stickiness on her fingers.

The tree wasn't skinny enough. The trouble was, none were.

The snow was falling thick now, the woods turning from green to grey. Her sneakers left brown tracks, a mush of dirt and dead leaves in the shape of footsteps.

The swing caught her by surprise, hanging there, hanging from its big tall tree, perfectly still. It was white and purple—lilac, like some Zuppies at Frenchy's. She'd seen it before with Ty, looking for the lake, the day he'd ducked under so long she thought he'd drowned. It marked a fork in the path, either way leading to the shore. A sign that they'd almost made it.

Something told Gray this was where to stop.

The seat was crooked and way too high to climb up on—some asshole had wrapped the ropes around and around the branch it hung from, wrecking anybody's hope of swinging. Not like when Ty had boosted her up, given her a push. Just hanging there, it didn't even move when snow fell from it.

The wind picked up.

Stick your tongue out, said the friend, why not?

But her fingers were cold, and it slipped. Before she could save it, it fed itself to the snow. Its greyness bleeding, dissolving into white.

Carol Bruneau is the Halifax-based author of six books and a new short story collection, A Bird on Every Tree, coming out with Nimbus/Vagrant in 2017. Her most recent novel, These Good Hands, follows the life of French sculptor Camille Claudel. She teaches Writing for the Arts at NSCAD.