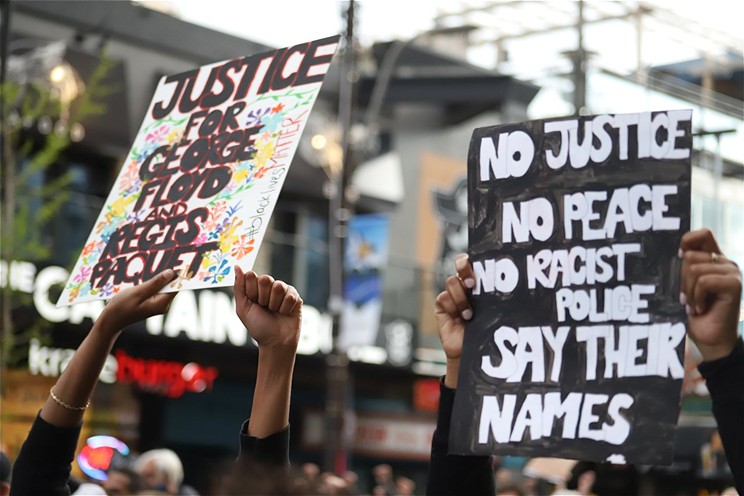 Victoria Walton
Signs at the June 2 Halifax protest for George Floyd, whose death at the hands of Minneapolis police has four officers charged with murder.

To get your thoughts, Halifax’s committee to define defunding police released a survey.

Three hundred and sixty-five day ago, George Floyd was murdered by police officers in Minneapolis. Floyd’s death brought momentum and weight to a conversation about police brutality that Black and Indigenous Haligonians had been trying to have in our city for years.

After thousands kneeled in silence, hundreds marched, and many more protested in person and online, the processes to bring about real change in how police systems work in Halifax are just getting underway.

Halifax Regional Municipality’s police oversight board, the board of police commissioners, is undertaking one branch of this work, striking an independent committee to define defunding the police. The committee, helmed by professor and poet El Jones and flanked by a wide breadth of community members from Halifax, is charged with coming up with a definition for defunding the police that reflects the needs of Halifax.

Street check report confirms what Black Haligonians have known for years: Will it be enough to spark change?

The committee is leading a variety of public engagement activities to fulfil its mandate, the first of which is an online survey you can fill out now. So far over 1,000 people have filled out the survey. An impressive number by Halifax survey standards.

The form asks respondents to explain if or when they’ve interacted with police, what kinds of programs in HRM contribute to public safety, what role police should play in Halifax whether or not they support defunding the police and what defunding would look like in HRM.

The results of this survey will join a collection of research and community and focus group engagement to inform a definition and recommendations for action that the committee will present to the board of police commissioners.

This work is connected to but separate from the other police reform initiatives HRM has said it is taking on, one being a large review of policing and police policy in HRM—which was brought forward by councillor Waye Mason in summer 2020—and a review of the relationship between the RCMP and HRP in Halifax Regional Municipality, brought forward by councillor Tony Mancini.

In the 365 days since George Floyd’s death, momentum for police reform and enthusiasm to support Black lives in Halifax has waned. Only 50 percent of the councillors who voted to reverse a decision to spend money on a military-style vehicle for HRP in response to Floyd-spurred protests from the community are still there. The current regional council, elected into office in October, voted to increase HRM’s police spending by $2.7 million this year.

The committee to define defunding the police is also hosting an online community consultation session on June 19. Residents are invited to speak for 10 minutes to share their perspective on the prospect of defunding the police. People can sign up to speak here or send in submissions to defundhrm@gmail.com.