My first death threat came when I was 23 years old. I was a naive tyro cartoonist for the Vancouver Province—a morning daily. Several more threats of bodily harm were directed my way, ceasing on the west coast when I joined the Toronto Star. Still more threats came at me there (not all from the editor, ha) throughout my six years with that paper. It was much more peaceful (Zeus be praised) throughout my years with The Coast. 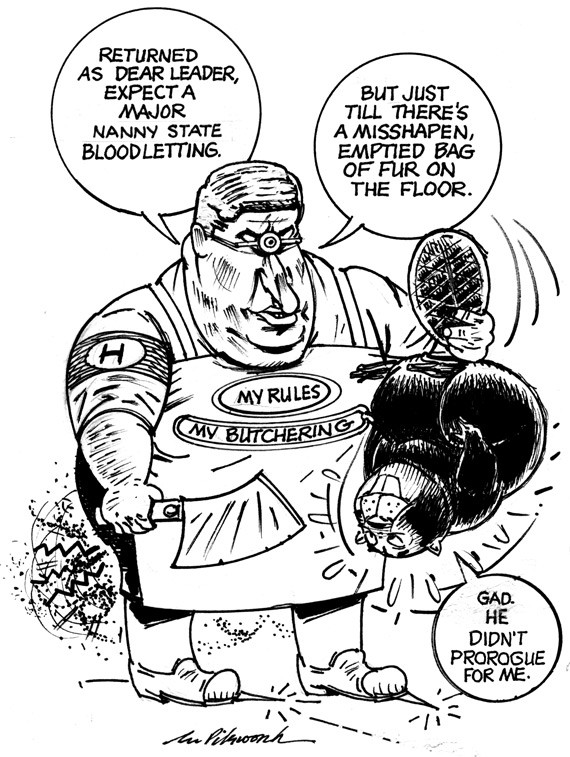 My kindly editor at the Province, to calm me down when a letter arrived at the paper addressed to The Cartoonist stating that its author intended to shoot me dead (for mocking the then-premier), told me that a threat was a cartoonist's badge of honour. Threats meant that the cartoons were having their intended effect. Some day, I speculated, I would look like an old Soviet-era general with a chestful of reinforced racks displaying my "badges of honour".

Political cartoonists are born with levels of innate disrespect for authority, pomposity and cronyism. And as such, are given to expressing their disrespect in provocative drawings. This mockery outlet acts on the cartoonist's psyche like an endorphin rush. It feels good when the pencil or pen, sharp as a dart, hits its mark.

Thing is, those wielding immense power, whether in business, politics, applied science or religion, recognize truth when its presented to them. By ecologists, scientific researchers, political scientists, historians, religious skeptics, satirists or political cartoonists. They recognize it and they don't like it openly exposed. For them, it's the equivalent of a grievous open wound. So they conspire to muzzle criticism, truths, by all means at their disposal: fair but mostly foul. Taken to extremes, this can take the form of the attack on Charlie Hebdo.

Australian prime minister Tony Abbott, parroting American Tea Party rhetoric, yawped about Islamist terrorists that "they don't like our freedoms; don't like our way of life." The little man swelled up to growl that "they" will never stop our Freedom of Speech.

Fine. But as a cartoonist (retired, yup, but from not my cartoonist's critical faculties), isn't our Freedom of Speech exactly what is under attack in Canada, England and the United States by the Tea Party-minded politicians and oligarchs currently in power? It's a two-way mirror, friends. A dark one at that.

Uncomfortable truths is what cartoonists focus in on—sometimes much to their peril. Courageous cartoonists in Mexico, Algeria, Libya, Egypt, China and even in so-called democratic nations have been assaulted. Some killed.

The Charlie Hebdo cartoonists were (and will continue to be) across-the-board mockers of the powerful. Targets for japes in Hebdo history have been not only tyrannical Islamists, but also rabid fundamentalists of each and every religious stripe. Plus politicians, "seleb" culture and oligarchical business overlords. In truth, Charlie Hebdo was and is an equal opportunity offender.

Telling truth to power is needed evermore in these sketchy times. When tyrannical power of any nature attempts to tamp down the telling of truth, we all, living under the elitist boot, can still sand up and defiantly say, "Je suis Charlie." "Nous sommes Charlie."