What if the Halifax Explosion happened today?

How Halifax’s Emergency Management Plan would handle another catastrophic event. 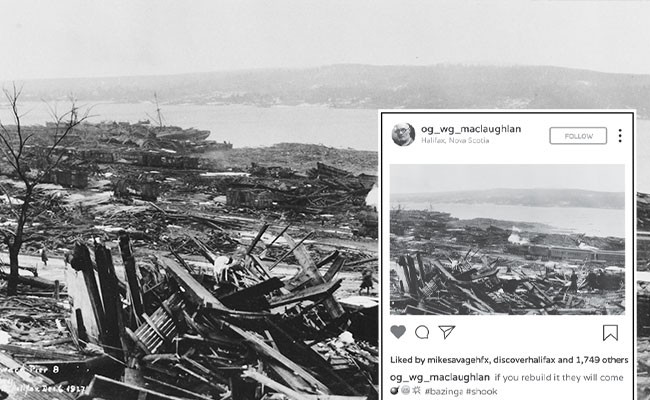 Given the inescapable 100th anniversary coverage, it's quite hard to imagine anything worse than the Halifax Explosion occurring again. But given current events, it's also all-too-easy to picture another Mont Blanc-meets-Imo situation taking place. The more war gets mongered by Americans, the likelier Halifax goes into action as a naval staging site. The nuclear-powered USS Dwight D. Eisenhower was already visiting HRM's waters back in June, and that should give pause considering the rash of collisions the US Navy has had this year, including that time in August the destroyer John S. McCain hit an oil tanker near Singapore.

Luckily, Halifax is ready. With 100 years of prep-time at its disposal, this summer regional council approved an updated Emergency Management Plan to help the city respond and recover from "potentially catastrophic events that may befall the municipality from time to time." In essence the plan is a roadmap for clear communication and best use of resources, no matter how dire the situation or how huge the relief effort, by using one "emergency management command system."

Calls to 911 and eyewitness sightings by officials cause fire trucks and ambulances to be dispatched. Eventually, news of the destruction reaches HRM's incident command system and its incident commander. The explosion in the harbour is ranked a Type 1 problem—the highest grade—automatically triggering a state of local emergency.

The incident commander then notifies the EMC—emergency management coordinator— who is supposed to notify the city's chief administration officer. The CAO then activates the Municipal Emergency Plan, all within 30 minutes. The plan allows another 30 minutes for word to get out: From the CAO to the mayor, and from mayor to council, while the EMC alerts the city's emergency planning committee, the province and any non-government partners like the Canadian Red Cross.

An hour after the blast the Emergency Operation Centre has been activated. The base of operations starts dealing immediately with evacuation from the devastated areas, threats to life and "abnormal requirements for emergency response."

The full force of the explosion has ripped up homes and left structural damage in many high-rise buildings. Shelter is at risk. Evacuation of people and animals commences, getting them from hot zones to a safe area, then to a reception centre where housing needs can be assessed. The Department of Community Services coordinates on the humanitarian services, while the operation of reception centres and temporary shelters is taken over by the Red Cross.

Other areas aren't so badly hit. Community comfort centres are set up by HRM to provide essentials like meals, hygiene, charging capabilities and information. EMO volunteers are activated. Help from outside the province is routed to where it's needed.

Eventually, after the people are safe and fires are out, the emergency response shifts to recovery, with the EOC formally giving authority to a recovery manager. Properties are rebuilt. Infrastructure is repaired. People return home. Meanwhile, a separate Business Continuity Plan will address the restoration of critical infrastructure like electricity, gas, drinkable water and sewage services.

Soon—no more than two months after the blast according to the emergency management plan's timeline—municipal higher-ups meet to update the plan based on how well Halifax responded to this latest disaster. They have to ensure we're ready for next time.