What’s the kinkiest thing that’s ever happened to you?

Halifax gets a little nasty in these answers to our Sex + Dating survey. 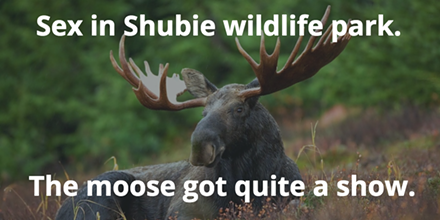 "Kink" is a relative term. Some people’s kinkiest experience was being “a human cake at a fetish night” (seriously). Other people just masturbated “four times in one afternoon,” which might not seem as adventurous as being slathered in icing but is making us envious of having that much free time.

What connects almost all the “kinkiest thing” answers from our Sex + Dating survey-takers is that the people involved found it all really, really hot. No shame. This is a judgement-free space, so let’s experiment a little Halifax and see what feels good.

“My previous partner was into exploring a lot of my boundaries in a really respectful way. We tried a lot of exploratory fetishes together: stuff; butt stuff; costume stuff. He always made it very sexy. However weird I may have thought it at first, I always got into it because of how into was without ever making me feel pressured.”

“Nothing as crazy as I'd like. I walked in on a friend and a casual partner having sex and was asked to join in. Nice and spontaneous.”

“I love finding boys who want me to peg them. I'm still thinking about the last one.”

“Being tied up, blindfolded and dominated for hours (teased, pleasured) but not allowed to express .”


“New BF threw me on bed, ripped my clothes off and ate my...everything...was all new to me.”


“A guy told me that I could use his PlayStation as long as he could lick my feet while I played, so of course I said yes.” tweet this
“In a sex club, being bound and whipped while people watched.”


“Was camping in Inverness, Cape Breton. Off-the-beaten-path type camping, the type where if you need to poop, you go do it the woods and use some leaves. Anyways, there was a huge cliff and there was path that down to a gorgeous beach. At one part of the there was a part where a fresh water river came off the cliff and made a waterfall, flowing into the ocean. A girl (with whom I had relationship) and I had phenomenal sex right under that waterfall.”

“Daddy/daughter role-play with an internet stranger. We never spoke before or after our encounter. Fucking hot. Full bondage, full toy use, sexual and emotional punishment.”


“Nothing overly kinky. My best friend and I making out with each other on top of a guy, who I later had sex with.”


“I dated someone obsessed with me sitting on his face and smothering him. I'd recommend it.” tweet this
“I don’t think I’ve done anything very kinky. But I once let my boyfriend saran wrap me and have sex. Only thing my bouncing boobs, so he tore it off midway through.”


“Dressed in a girl’s panties and then peed on.”


“Possibly being tied face-down on the bed and getting played with via magic wand/ spanked and whipped and gagged. All while having nasty, horrible things whispered in my ear. Or maybe having my partner spit in my mouth during sex...that was pretty kinky.”

“A one-night-stand I had vomited on my dick and went back for seconds.” tweet this

“Being tied to a wall with my hands over my head, flogged with a leather belt and then fucked from behind while still bound. It was the best.”


“Co-worker sitting on my desk in a short skirt and no underwear, flashing me and writing a note about what she intended to do once the boss left (the latter was sitting a desk a few feet away).”


“Got dominated by a butch lesbian against a window of the Lord Nelson on Spring Garden in the middle of the day.” tweet this
“Having sex in a hotel swimming pool and getting caught.”


“Nothing too crazy. Having sex five times in one day.”


“Picked up a tourist who was staying on Clyde Street and fucked her in the daytime on the street outside the house.”

“Working as a caterer, sneaking off with a fellow employee to fuck aggressively in a backroom, with a meeting happening just a few feet away on the other side of the wall.”


“Having sex with my wife while she was having phone sex with toy.”


“A foursome where three of us shared one guy.”

“Picked the lock on an ‘out-of-order’ accessible washroom and fucked a boy I'd met less than 15 minutes prior.”


“Sitting at the dinner table while he turned up my remote control panty-vibe.”

“Had sex on those cliffs just outside of Antigonish.” tweet this
“Too many to list—being tied up naked on the lawn once and left there for a few hours (while being filmed) until he said I was 'good and ready.'”


“I was once seeing a girl and we decided to set a sexual goal for ourselves. I was going to try to make her squirt at least once a day for seven days straight (we stopped counting after 10).”

“Roommate’s girlfriend walking in on sex and standing there staring just a little too long.”


“My lover covered me in whipped cream and berries...then promptly feasted upon the bounty! Just getting into a bit of as of late...very exciting!”

“Doing it in my bedroom with family downstairs during the day.”


“An ex-boyfriend who'd greet me at the door, blindfold me, handcuff me and then give me the best orgasms of my life. All just inside the entryway to our apartment so our could hear us in the hallway outside.”

“Met a tinder boy. He ate my ass first date.” tweet this
“Finger-banged in front of coworkers under a table at a bar by a coworker.”

“Neither my partner or I could walk straight for three days. Used muscles we didn't even we had. And while it was unbelievably sexy and satisfying, we knew that it could not, and should not ever be repeated again.”


“Fishnet stocking ripped at the crotch, wine poured on my chest and hands bound to the bed-frame.”


“Library sex” tweet this
“Was used as a human sex toy as part of friends' orgasm denial/humiliation scene.”


“My ex and I spent almost an entire day touching each other under a blanket in a crowded tour bus full of our friends. Somehow no one noticed. Super hot.”