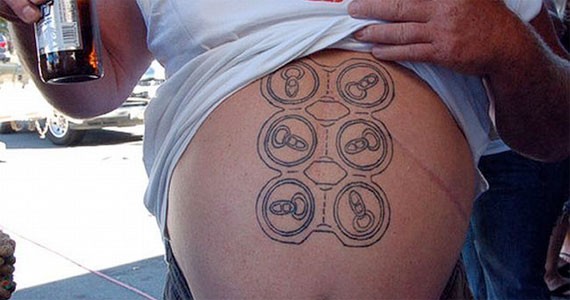 Ugh. That girl who got the Sidney Crosby tat and was in the Herald a few years ago. —-Chrissy Merrigan

When I was getting one of my tattoos done I asked the artist the same question and he gave me his book of tattoos he's done and one guy got a crying penis on his upper thigh. I unfortunately don't have a picture. —-Tara Young Cardinals

There's a guy in Halifax that has a tattoo of a lady on his neck, from a few steps away it looks like a penis. —-Angela Dawson

This guy who got a tattoo of a fish on his arm. It ended up looking like a penis instead. Sometimes cheap tattoos are just not worth the risk. —-Sarah Burke

I saw a girl with a "tramp stamp" of musical notes a few years ago. Musical notes above your ass. Pretty comical. —-Chad Harrington

I have a friend who has the province of Nova Scotia tattooed on himself—- however the tattoo artist completely forgot to include Cape Breton, and he never went back to have it fixed. This is the same guy who has the word "Cadillac" tattooed on his inner arm in cursive writing. He doesn't remember getting the tattoo, and it has no significance to him at all. —-Kristen Welsh

In grade 10, my friend got a coloured tattoo of a knife piercing through a basketball. Yes, you read that right. A massive knife literally stabbing an innocent orange basketball. When asked about it, she said it was mean to symbolize the saying “no pain, no gain.” While she used to be addicted to basketball, and while yes, at one point this might have made sense in her head, I am pretty sure she regrets it now. —-Anonymous

Over a decade ago my friends decided to surprise me with a stripper-tequila 19th birthday party. Complete with a mullet and MC Hammer pants, the stripper was also adorned with what looked like a homemade tattoo of  “I Love Sex” on his arm. I'll never forget that night or that terrible ink. —-Anna Jolly