Look out, there's a monster coming. 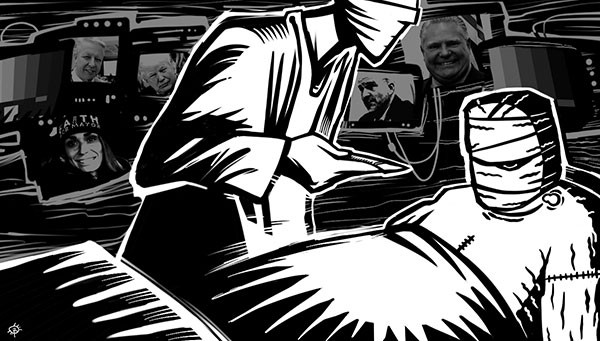 Already there have been sparks of life from young Progressive Conservative members, federal Tory hopefuls and Halifax councillors who—knowingly or not—trudge out common plays from the populist, far-right and libertarian online playbook.

Right now, though, the closest thing Nova Scotia has to a genuine right-of-centre populist is John Lohr, one of the candidates fighting this weekend for Progressive Conservative Party leadership.

The Kings North MLA has spent his campaign threatening universities with a withdrawal of government funding should they “give in to political correctness” by shutting down “free speech.” He’s a proud pro-lifer who would “like to see the federal government put parameters around abortion.” Lohr has also followed similar populist political figures by ignoring operational jurisdictions to release viral-friendly barbs about whatever hot topic is trending online, whether its the lack of Uber in Halifax, the removal of the Edward Cornwallis statue or wrongly claiming that environmental activists against Northern Pulp were paid .

Someone who is paid is Lohr’s campaign manager, Steve Outhouse, who the MacDonald Notebook describes as an “influential backroom player during the 10-year long  regime of Conservative leader Stephen Harper.”

Lydon, who’s old friends with Outhouse, says the strategy for a dark-horse candidate like Lohr seems to be to “get this candidacy from an also-ran, ‘isn’t John a good guy,’ to a leading policy candidate” by attempting to go viral in online conservative circles.

It’s working, a little. Lohr’s anti-left policies have attracted ‘star’ endorsements from former Acadia University professor Rick Mehta and former leader of the Christian Heritage Party Jim Hnatiuk. There are also smaller endorsements, such as from Joe Hazelton, an IT manager in Yarmouth whose YouTube channel rants against George Soros, “the rise of Islam in the west” and the Justin Trudeau’s efforts to “repatriate and reintegrate ISIS terrorists.” Hazelton’s recommendation is proudly displayed on Lohr’s campaign page.

Canada has a history of these movements. There was the Social Credit Party, Preston Manning’s Reform Party and, more recently, fringe Tory personalities like Kevin O’Leary and Kellie Leitch. It was at the federal Conservative convention in Halifax back in August that MP Maxime Bernier announced he was leaving the CPC to form a “right of centre, populist” People’s Party of Canada.

A national poll from last year found 80 of Canadians think “the elite” are “out of touch” with ordinary folks and that mainstream politicians can’t solve society’s problems. Hard-line right-wing views have increasingly cropped up on university campuses and in alternative media. Anti-immigration, pro-nationalist and racist voices are speaking up louder and being amplified by their supporters. It’s a landscape ripe for populists, and they’ve stepped up to the plate.

Doug Ford’s Tories took Ontario earlier this year. The Coalition Avenir Québec formed a majority government in that province and the Anglo-centric People’s Alliance made big strides recently in New Brunswick. Just this week, a white supremacist came third in Toronto’s mayoral election. A distant third, but she still earned some 25,000 votes.

Lydon doesn’t think it’ll be a road Nova Scotia’s Tories head down, however. The red-Tory Progressive Conservative brand isn’t particularly right-of-centre. Given that the province’s Liberal premier is already a fiscal right-wing, the question for the Tories is whether to slice even further right or try to make up the centrist ground Lydon says the Grits have largely vacated.

“They almost have to go left of the government, to a degree.”

The “real meat on the bone” for populism in the Maritimes could come instead from the left, he says, pointing to the success of the Greens in PEI and policies from the NDP here in Nova Scotia.

“You’re giving non-traditional, social media-driven activist voters an outside-the-box option that isn’t one of the big two,” says Lydon. “I don’t know if here in Nova Scotia it would be to the right.”

What's true is that, right now, every party is struggling to spark the interest of millennial voters, says the pundit. That means engaging with the public in those online spaces where they congregate, and telling them whatever they want to hear. Add in a cult of personality and, well...

“If it’s not the unbeatable scenario, it’s certainly the requisite scenario to be impactful right now,” says Lydon.

In other words, a populist movement might be unavoidable, if only because it could be the best way to win. Now that’s scary.