Where I Work: Apartment 3 Espresso Bar 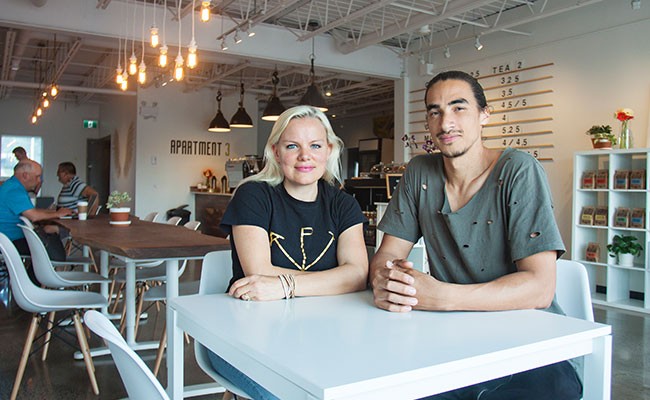 Three years ago, Alex and Heather Stephen left the bustle of Toronto for Lower Sackville in search of a change of pace. Alex is a musician and St. FX alum and Heather is a former World Cup bobsleigh competitor, but after they got married they dreamed of starting a small business. Little did they know that dream would manifest as the first third-wave coffee shop bringing high-end artisanal coffee to their sleepy suburban community. "Life is big, right?" Heather says, laughing. "A cafe was always something I wanted." The Stephens believe that Lower Sackville is one of HRM's hidden gems. "It's really a jewel that people don't notice," Alex says. "But when we moved out here, we realized there was no place for people to hang out." Tired of driving into Halifax or Dartmouth to socialize, they decided to create a space for their community.

In April, Apartment 3 Espresso Bar opened at 833 Sackville Drive. "We wanted a place where Sackville can be who it is," Heather says. "It doesn't matter who you are, just come and get out of your daily routine." In the following days, Alex says the lineup was out the door. Apartment 3's coffee comes from North Mountain Fine Coffee in Berwick—the pair wanted direct trade coffee to increase the profit of the grower and the quality of the bean. The Stephens also enlisted Vandal Doughnuts and Tart and Soul to supply their selection of freshly baked goods, which includes the chippy bar, a custom treat from Heather's imagination made from Ruffles chips, marshmallows and drizzled chocolate.

WHERE THEY DO IT

Apartment 3 is nestled in the corner of a strip mall, a spot that Heather and Alex waited for years to pop onto their radar. One week, when they were frustrated by the location search, their pastor at Nova Church told the congregation not to give up on their dreams. The next week they found their location, complete with warm lighting, high ceilings and a drive-thru which is set to open in the coming months. The space is minimalistic and modern. "Sometimes environments can be distracting, almost stressful," Alex says. "We wanted a simple, open space." Much of the furniture was built by Alex—including the large live-edge dining table—and can easily be moved aside for community events. (They plan to host music nights in the future.) Pieces from local artists decorate the walls, including a large mural of golden angel wings by Katelyn Morse. "We wanted artists who support our design and keep things minimalistic," Heather says.

The cafe gets its namesake from the Stephens' old apartment in Toronto, a place with a steady stream of people and conversation. "We would sit around and dream about what the future would be like," Alex says. "I think that's what we wanted to recreate here." Apartment 3's logo features three intersecting keys, each with different symbols cut into the bit: A heart, a cross and the number three. "The heart represents the belonging we want people to feel here," Heather says. "The three represents that third place, other than home and work, where you enjoy going. And the cross represents the bigger picture — you don't exist in your little bubble."