Where I Work: BeerTech’s Ken Greer

Halifax’s number one draught pick on how he started a business dedicated to pristine beer lines and technologically sound systems. 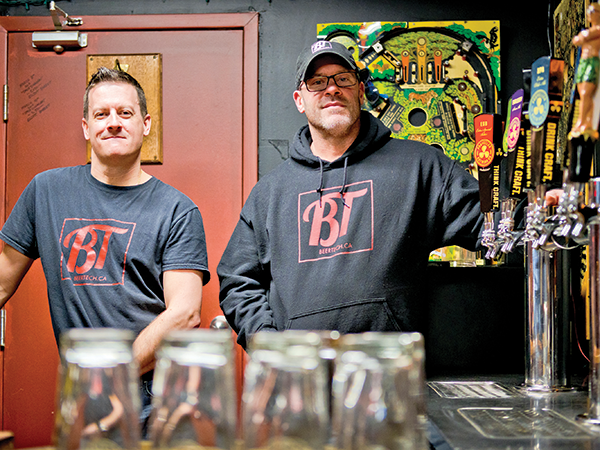 Who he is
Ken Greer grew up in Belgium, where having a beer at lunchtime was "no big deal." Once, when he tried to do this at a restaurant here in Halifax, he was told the draught system was being cleaned. "Who cleans beer lines at lunch?" Greer asked. And then a lightbulb went off: After 15 years in the restaurant industry, Greer decided it was time for a career change. He took a training and certification course in Pennsylvania, followed by an apprenticeship in Toronto and then opened BeerTech Draught System Technologists in 2013.

BeerTech's first draught system install in Nova Scotia was at Stillwell. Since then, Greer and his two-person team have worked with Big Spruce, Saltbox, Good Robot, 2 Crows, Brightwood Brewing, EDNA, The Stubborn Goat and Propeller—to name a few.

What he does
"We make sure that the beer ends up in the glass as it was intended by the brewery," Greer says. He tries to get a sense of the client's envisioned draught system. What are they trying to accomplish? How do they want it to look? What beers do they want to carry?

"Every single install is different," Greer says. Sometimes there's a 30-foot run from the walk-in cooler to the tap, and sometimes there's a 200-foot run. With each varying detail, the technology is adjusted to keep the beer properly carbonated while still applying enough gas and pressure to propel it into the glass. While CO2 naturally occurs during the fermentation process, if you apply too much while pushing it through the lines the beer can become over-carbonated. On top of this, different styles have their own levels of carbonation.

For example, a nitrogenated stout—like Guinness—would need to be pushed through the lines with a nitrogen blend of gas.

Beyond installation, BeerTech also provides maintenance and cleaning services. If the lines aren't cleaned and maintained regularly, a build up of yeast, beer stone and bacteria can form. Lines must be cleaned and rinsed properly at least monthly, and often between switching beer styles.

Where he does it
While based in Halifax, BeerTech has installed draught systems as far-flung as New Brunswick and Newfoundland. Nowadays, Greer tries to stay local to ensure his team can best address client needs. His team often travels to Annapolis Royal or Bridgewater for installations and maintenance.

Greer enjoys visiting his clients to see how his work fits in with the bigger picture of their establishment, especially locations where he did a "humdinger of an install," such as installing 28 taps at The Church Brewing in Wolfville or building custom towers for 2 Crows. More often than not, a bar's draught system is considered its centrepiece—there's a reason they're mounted where people can see them.

Why it works
In the first few years, Greer and his team worked hard to establish a strong reputation for BeerTech. Now, as the work begins to speak for itself, Greer says he owes a lot to the tight-knit beer community. While he continues to submit proposals and keep tabs on upcoming establishments, his overlying strategy is simply to look after his clients.

"If we look after our customers, they'll spread the word for us," Greer says. "I always try to give back to the community that supports me. Seeing them at work makes me happy."