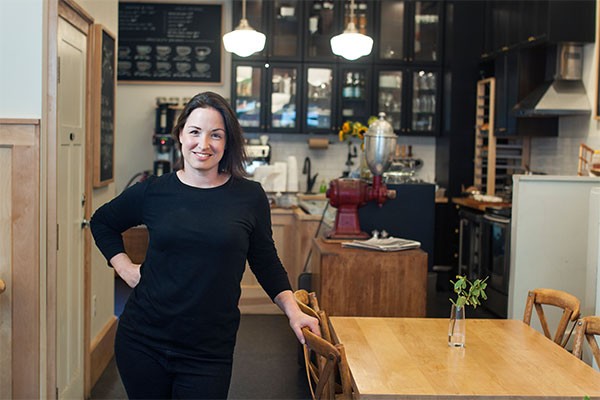 WHO SHE IS
Fifteen years ago, Brady Muller vacationed in Halifax and ate at Chives Canadian Bistro with her parents. She still remembers the meal: Mushroom pappardelle and one of the best steaks of her life. At the time, she wanted to start a catering company, but her mother feared her lack of experience. When chef Craig Flinn entered the dining room, her mother stopped him. “My daughter wants a catering company, but she doesn’t know what she’s doing,” she told him and Flinn invited Muller to intern at Chives. “It wasn’t even a five-minute conversation, but it changed everything,” Muller says. She interned with Flinn for a month, and then moved to Halifax where she eventually opened Ciboulette in partnership with Chives, a tucked-away upstairs cafe that became known for its sandwiches and paninis. In March, Ciboulette reopened as Bird’s Nest Cafe in a larger street-level location next-door.

WHAT SHE DOES
Muller waited for years to find a new location for Bird’s Nest. “It takes a lot of muffins to build a new restaurant,” she says. “We’ve been so starved for space for so long.” Ciboulette had loyal customers, but with an eight-seat capacity, the atmosphere was quaint bordering on cramped. Now, with 25 seats, people have room to spread out and linger, and Muller has room to explore. The expanded menu includes new items such as buffalo chickpea salad and a smoked salmon and potato rosti with poached eggs. Bird’s Nest also opened a second location last year at the Discovery Centre, a canteen- cafe with a few extra, kid-friendly snacks like caramel corn. Between the cafe, catering and a second location, Muller works hard to keep everything running smoothly. “There are long days, but it’s like a baby,” she says. “Even if you’re not here, it still exists. There’s always something happening.”

WHERE SHE DOES IT
Wedged between the Old Apothecary and Chives, Bird’s Nest is located at 1547 Barrington Street. The name has a double meaning: not only has Bird been Muller’s nickname since she was little, but the upstairs space where Ciboulette was housed will soon open as an additional nest for customers. “It’s very personal,” Muller says. “But it also makes sense with because there’s this little thing tucked up under the eaves.” The kitchen peeks out from behind the cash, allowing customers to watch as ingredients become menu items. Eggs are cracked and scrambled for breakfast wraps and caramel sauce bubbles in a saucepan, waiting to be poured over popcorn. A mixture of jazz and classical music plays as a barista climbs a rolling ladder to grab a stack of plates from the cabinets that stretch high overhead.

WHY IT WORKS
As airy and bright as the new location is, Muller believes Bird’s Nest gets its vibrancy from its customers, not its design. “When the doors open and people start coming in, there’s so much life in here that it takes on a feeling of its own,” she says. She also credits her staff members for the effort and dedication they bring each day, including her husband, who pitched in to help get the new location off the ground. They met years ago in the kitchen at Chives. “My whole life stems from that restaurant,” Muller says with a smile.