Who's going to vote for the Greens? 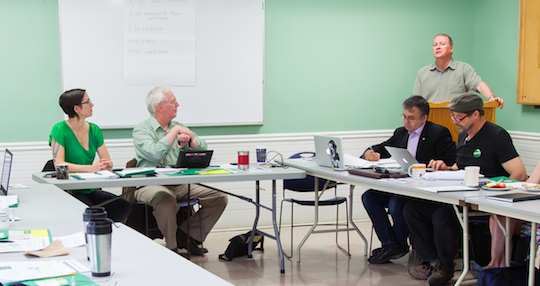 It’s getting close to performance-review time for the 19-month-old Stephen McNeil government.

Nova Scotia’s major political parties are vying for support in three provincial by-elections to be held this year. Candidates for the ruling Liberals, and the opposition Conservatives and New Democrats, are going to be busy glad-handing strangers they encounter and promoting themselves and their party to local voters.

But what about the provincial Green Party? Will it join the by-election race in two Cape Breton ridings and one in Dartmouth? (Premier McNeil is expected to announce an election date soon.)

Percy told The Coast the Green Party plans to compete in at least one—possibly two—of the by-elections.

There are vacancies in Cape Breton Centre and Sydney-Whitney Pier, due to the resignation of the NDP’s former MLAs for the areas, and in Dartmouth South, because of the death of Liberal MLA Allan Rowe in March. Some 48,380 eligible voters live in the three ridings.

In the 2013 provincial vote, the Green Party of Nova Scotia had candidates in 16 electoral districts. The party picked its battles because it simply couldn’t afford to present a full slate of 51 political hopefuls, Percy said.

The filing fee per candidate in an election is $200. Because the Greens are a small party with limited funds, Percy says, they must be discriminating when selecting places in which to run members.

Ballots cast for all Green candidates in the last general election totalled 3,528, according to Elections Nova Scotia. Results from 2013 showed the most votes (369) that a Green flag bearer won was in a last-place finish in Halifax Needham.

The party is definitely going to field a candidate in the Dartmouth South by-election, says Percy. “We have some members in Cape Breton who have expressed interest in running” in that region, too, he added. Percy had been the Greens’ chief for six years. He said he feels good about the party’s future.

“Six years ago, we were split up into various factions,” Percy acknowledges. “Now, we have a cohesive group of people and we have a constitution, bylaws and policy documents that are solid and you can stand behind.”

“Greens are not commie hippie treehuggers,” the party’s website says. “We are serious people with a broad range of knowledge on issues that affect all of us.”

Percy said the party has more than 100 members, with much of its support in the Halifax region, the central Annapolis Valley and on the province’s north shore. In a speech to attendees at the meeting in Dartmouth, the departing leader urged Green members not to be “trapped by ideology.”

“Effective politics is understanding what is possible at a given time. Listening is far more important than talking,” Percy said in his farewell address.

The party’s interim leader is metro resident Brynn Nheiley. She’s been the Greens’ deputy leader and will guide them at least until the next leadership convention, which is to take place within six months.

In other provinces, history-making developments in the political arena have happened during the past several months. For instance, there’s an NDP government in oil-rich Alberta, and small-c conservative Prince Edward Island and New Brunswick each have a Green Party member–leaders of their provincial parties–sitting in the legislature. In 2013, British Columbia Greens sent their first member to the BC legislature.

The Green Party of Nova Scotia would love to crack the lineup at Province House in Halifax with a by-election victory, or register a district win during the next provincial vote.