Who's to blame when apartments don't recycle?

Sorting out the problem with Halifax's rental waste. 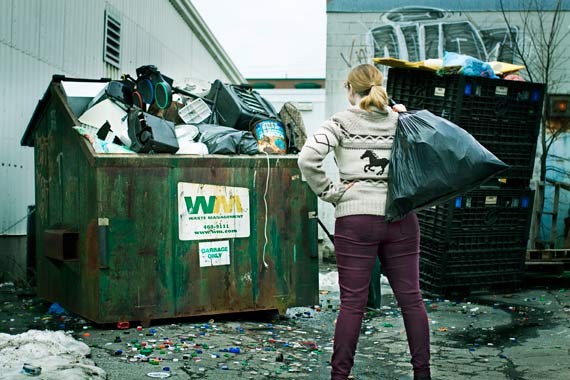 There’s a big waste problem slipping between the city’s cracks and winding up in the landfill. Compost and recyclables are getting mixed up with regular garbage—and the culprit is often apartment buildings.

Living in a multi-unit building, you may have come across this issue. There will suspiciously be no green bins for organics, and sometimes not even any recycling bins. Most apartment buildings hire private haulers for the waste, but it all ends up—unsorted—at the city’s Otter Lake landfill.

“Our one green bin we have for the entire building has been out of commission for at least three months now,” says Hillary Cottenden, who lives in a 25-unit apartment building in Cole Harbour, owned by Twin City Management. “We were given the paperwork that explains what goes in what at the beginning of our moving in. It’s not rocket science; the bin is green and the other’s blue. But for some reason, everyone puts Sobeys bags full of compost into the bin. So, the city just keeps putting sticker on top of sticker”—saying it’s not meeting the proper requirements—“waiting for someone to remove all the bags. It’s overflowing, and the landlord or building management haven’t bothered to touch it.”

Laurie Lewis, diversion planning coordinator for Solid Waste Resources, says adequate garbage service at apartment buildings rests on the shoulders of property managers and owners. “That’s all the responsibility of the owner. He has a hired hauler and ensures he has service that meets the needs of tenants,” she says. “He provides receptacles for tenants and those then would be collected by the hauler. He determines how many haulers he needs in ensuring that the material is going to the proper facility.”

But according to the property managers, it’s boils down to an issue of tenant compliance—or lack thereof. Jeremy Jackson, president of the Investment Property Owners Association of Nova Scotia, says waste management is a group effort: “In any population, you are going to have some folks who choose not to comply. In an apartment setting, the sheer population density will make it potentially stand out more than a traditional single-family dwelling neighborhood.”

Joseph Willett (name changed by request) lives in an eight-unit building on Windsor Street—the recycling situation there is a mess. “The landlord doesn’t have a well-marked system and makes no effort to have the area cleared in winter—or the rest of the parking lot for that matter—and so it leads to problems,” he says. “The building offers poorly marked bins, and tenants don’t ensure bags are put in correct bins, so everything quickly becomes mish-mashed.”

Recyclable and compostable materials account for 47 percent of the total garbage dumped annually at the city’s landfill. That means 29,000 tonnes of recyclables not being recycled every year in Halifax. About 60 percent of the garbage at Otter Lake comes from the commercial sector. According to a 2013 Stantec report, up to half of that commercial waste could be recovered as recyclables or compostable organics. Of course, apartment buildings would only make up a portion of the commercial waste, with retail, restaurant and office trash also figuring into the numbers. The city couldn’t estimate what percentage of industrial and commercial waste is from rental companies. It’s all one big batch of shit.

“I think you should be aware that there are many good apartment waste programs,” adds Lewis. “We have seen these for ourselves. That includes Oxford Properties, Mont Blanc Properties and Southwest Properties, to name a few.” So, who’s to blame for recyclables not getting recycled despite the sorting efforts of tenants? Jackson dodges a concrete answer.

“Many property owners work closely with HRM Waste Management staff to educate and promote proper source separation,” he writes in an email. “As a community, we need to continue these efforts to improve the overall success of the program.”

Whether it’s laziness, apathy, ignorance or perhaps all three, trash sorting continues to be a problem at apartment buildings all across Halifax. Whoever’s to blame–property owners, the city or tenants—it’s a problem that effects everyone.