Whose wine is it anyway? 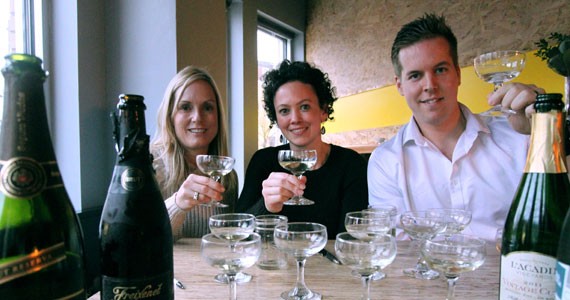 THE PANEL
Erin Horton, a sommelier and licensee sales manager at Bishop's Cellar.
Heather Rankin, sommelier and co-owner of Obladee. A Wine Bar.
Jordan Dickie, a bartender, formerly of Gio, and founder of the Facebook-based publication Viral Barman.

THE STORY
"I love these little glasses," says Heather Rankin.

She's seated at a table in Field Guide, a champagne coupe in hand. Erin Horton and Jordan Dickie sit next to her. Their coupes are all half-filled with a pale sparkling wine, bubbles curving up the edge of each glass.

"There's some good activity in there," says Rankin, holding up the glass, peering at the wine, which glows dimly in the grey winter sunlight. "I've never looked at it in these glasses before. See how the bubbles come up the sides instead of from the middle point?"

They're drinking the first of five sparkling wines in a blind taste test. Rankin and Horton are both sommeliers. All three are all well-versed in wine, knowledgeable about great, affordable picks. They have five mystery bottles that cost no more than $25 a pop (of the cork).

Wine 1: L'Acadie Vineyards Vintage Cuvee 2011 A certified organic cuvée from the Annapolis Valley made with L'Acadie Blanc in the traditional method. ($25, Bishop's Cellar).

"It's tart," says Horton, after the first sip. Rankin remarks on its "apple-juicy smell."

"It almost makes me think it's a local," Horton continues. "But I don't think it's one I've had, though, because they're usually lower alcohol, with a little sweetness."

"It's nice, but it's a little too much tartness for me," says Dickie. "I wouldn't drink it on its own, but I would definitely pair it with a meal. If you're looking for something that would pair nicely with tartric acid, like maybe a dessert or something."

"Or a creamy, bloomy rind cheese like a camembert or something," says Rankin. "Something really fatty."

Wine 2: Freixenet Cordon Negro A cava from Spain that comes in a black, matte bottle. Made from parellada and macabeo grapes. ($15.99, NSLC)

"This has a little greeny tinge," says Rankin. Horton calls it lemon green. "And the bubbles to me, look a little bigger," continues Rankin. "A coarser bubble, maybe."

Dickie is sure it's prosecco. "I call Gancia," he says, referring to the Italian sparkling wine, which falls well into the budget of these blind wines. "Happy summer day, right there. Prosecco. Gancia. For sure."

Horton has different notes. "It doesn't taste like it smells," she says. "It smells prettier than it actually tastes. It tastes mineral."

Rankin goes back to the bubbles. "The bubbles are much more aggressive. I don't love it," she says. "I think the bubbles are a bit attacking, but it's fine. I think I might prefer the first wine now that we've had two."

But she does see merit in Wine 2. "It is a party wine. The thing about drinking bubbly at a party, too, is I find the alcohol tends to be a bit lower and there's something about the CO2 in there that keeps you refreshed. You don't get as heavy as you do with a lighter red wine. It keeps things festive," she says. "Salt and vinegar chips with this would be great. It would bring out a bit of the fruit there."

Wine 3: Andres Baby 'Canadian Champagne' An insult to the French made with some mysterious hybrid of grapes that is hard to get a beat on, probably some French hybrids and labrusca. ($9.99, NSLC)

"That's a different nose," says Horton. "I'm not getting much off that nose." Everything changes with her first sip. "Oh my goodness, sugarama. Big time. This one"—she says, referring back to Wine 2—"I found kind of lean, it's definitely brut, I didn't get much sweetness."

"That's Baby Canadian or something like that," says Dickie.

"It's not too challenging," says Rankin. "There's lower pressure on that one." Horton also notes that the bubbles disappeared immediately. Rankin continues, "There's a bit of a finer mousse when you do taste it and they're there, but they're barely there."

"It's too sweet for me," says Horton. "I wouldn't enjoy a glass of that. I'm sure you could have a dessert or something with that, but it definitely has a higher sweetness level than I would typically go for."

"If you put any real food against it that had any kind of seasoning or salt," Rankin says, trailing off and shaking her head.

Horton finds this wine lean. "I like lean and crisp," she says.

"I do like this one. It has a good sort of chalky..." Rankin stops to finish her thought. "Kind of grassy, herbaceous, too. It's nice. I feel like this might be the Nova Scotian wine. I don't know, though. It has this sort of hybrid L'Acadie Blanc thing going on. We were just saying how humbling the blind tasting experience is, and how you get it so wrong sometimes. I think the mousse is nice. There was one there, the second one, where the bubbles were very, very aggressive.

"This is a gentler approach, but they're still there. Really nice."

Wine 5: Blomidon Cremant 2011 A blend of Seyval Blanc, L'Acadie Blanc and Chardonnay, it's a gentle sparkling wine made in the traditional method. ($24.99, Bishop's Cellar)

"It's interesting. I can feel the acidity in the back of my cheeks," says Horton. "It makes your mouth water. I do like it, especially when you have the sweetness in the front." Dickie says it has a "sweet introduction, dry finish."

"It's palate-cleansing," says Horton. "That's what I always tell people at the wine show: if you've had too much red wine, go have a sip of champagne. I'm a fan of the tongue scraper."

THE REVEAL
"I like the last two," Horton says. "Actually, the first one is not displeasing. Even number three, the sweeter one, has merit. It would be great with chocolate, Quality Street." Terrible wine with some terrible chocolate, we ask? "Hate is a strong word," she says. "It would work with, like, cheesecake."

Dickie says "Number two is prosecco. And number four tastes like something from the valley." Rankin names number four as her favourite.

Upon the reveal, Horton jokes "we all love Barefoot," and the table cracks up. There aren't a lot of shocks—though the prosecco Dickie was convinced of turned out to be cava, they all called the Baby Canadian. The only real surprise is the reveal of the Blomidon Cremant, which everybody loved, but nobody identified correctly.

They all agree that no matter what you like, sweet or dry, sparkling wine is always a good bet for the holidays. "If you offer anyone a glass of sparkling, they will take it," says Horton.