Why do people still hate cyclists?

The biggest obstacle to getting on your bike can be everyone else on the road. 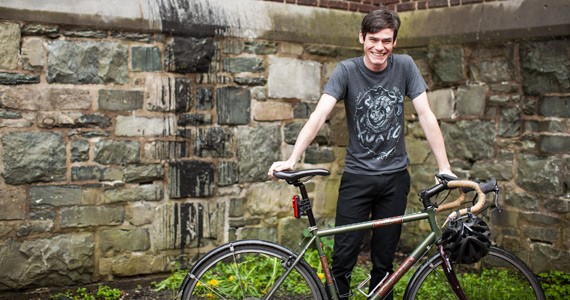 When you’re a pedestrian, you hate drivers. When you’re a driver, you hate pedestrians. And when you’re a cyclist, everyone hates you. We’ve all been there—in the driver’s seat, so to say. I myself am a former quasi-cyclist, and a current motorist, and even I have caught myself getting lame-ass road rage when I’m caught behind a cyclist. This active, environmentally conscious and hardworking samaritan, who’s squeezing out every ounce of vigour from their calves and quads to get them from point A to point B. Is there anything more respectable? And yet, many of us find ourselves aggravated at them.

“Faggot.” That’s what Sean MacGillivray was recently called for riding his bike this past winter near Coburg Road—but he’s not fazed. “It’s got to be hard having a micro-penis like that, so whatever,” he says.

MacGillivray, a Cape Breton ex-pat who’s clocked thousands of kilometres over the years (as well as a few collisions), has a pretty good attitude about it all, despite the verbal abuse that’s been hurled his way.

“There are a few a-holes, of course, and I have begun to notice patterns in terms of the type of vehicle driven by them,” he writes via email.

Frequent offenders include what he calls the Cavalier/Sunfire/Cobalt family of cheap, “fast” domestic cars, lower-end BMWs (“the poor man’s rich man’s car, for those with something to prove”) and pickup trucks of any variety. “I give all these vehicles a wide berth, and also avoid cars with obvious at-fault damage, like front-end dings and dents.”

But aside from the run-of-the-mill bully population, MacGillivray thinks Halifax might have a bad attitude towards cyclist respect (or lack thereof) because it’s a melting pot of many different types of motorists.

“One thing about Halifax is that a large number of its drivers are actually from smaller communities in Nova Scotia and elsewhere, and are overwhelmed by ‘big-city’ driving,” he claims. “Cycling is not widely adopted in smaller communities, so motorists from those communities are frequently unprepared to navigate along with cyclists.”

Just ask Curtis Spriggs, an avid cyclist who’s been in a couple collisions. Overall, his Halifax biking career has been a positive one, but he’s no stranger to our city’s cycling reputation.

“Perhaps the reason for the belief that Halifax isn’t bicycle-friendly is the lack of bike lanes,” he says. “There’s only really three to four major bike lanes on streets in Halifax, which might be a turn-off to people who are afraid to share the road with vehicles.”

For the experienced cyclists, biking in Halifax is a tough-but-dealt-with way to get around. But for newbies, it can be pretty intimidating. Sam Shannon just bought a bike this past April. She says even before she made the purchase, there were looming rumours of Halifax’s negative attitude towards cyclists that made her wary.

“I think growing up in Halifax, [there’s] always just been a mindset of Haligonians that bikers are annoying,” she says. “For me, it’s not about bikers being annoying. It just looks dangerous and scary. Bikers just kind of go for it in Halifax because they don’t really have a choice. There’s not a lot of room for them, or special lanes, so they have to just bike alongside cars and hope the cars cooperate. My mindset has more been ‘I would never bike the streets of Halifax.’”

MacGillivray says it can be helpful to use the negativity around cycling as fuel for a more assertive style when riding. In turn, maybe not everyone will hate you. “I had a cabbie pull up to me once and say ‘You know what, buddy? You’re doing everything right,’” he says. “I signal my turns, I yield to pedestrians, my bike is lit like a Pink Floyd concert, and I try to be courteous in general.”

Halifax’s cycle-hating culture could have its roots in misconceptions, a lack of bike infrastructure or just a clean-cut dislike for those that peddle. In any case, there’s a bike-hating atmosphere that still looms over our cyclist population. It’s probably about time that changed.