Why don’t we just eat the seals? 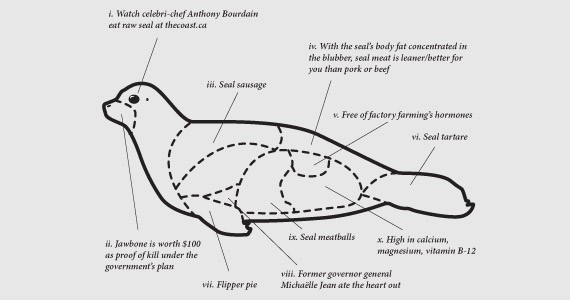 Seals: they're a lot cuter than cod. And for that reason, humans have a lot more trouble with the idea of killing them, let alone eating them. Two big, doleful eyes, a sweet button nose, a long, cuddly torso flanked by two adorable flippers flopping every which way---these elements can do no less than make up a creature so endearing it looks like it's straight out of a Disney movie.

Sure, seals are essentially the puppies of the sea, but that hasn't stopped the Inuit from hunting them and eating their meat for thousands of years. So what's all the fuss about?

The proposed grey seal culls in the southern gulf of the St. Lawrence and Sable Island raise the question, more urgently than ever: why don't we eat the seals? The sad reality is that thousands of seals are killed in commercial hunts every year, and while their pelts are sold (at consistently diminishing prices) and their blubber is made into an oil, there is hardly any market for seal meat, either in Canada or abroad.

Of course, there's an undeniable political stigma attached to the seal hunt in most of the world which translates into an aversion to eating the once-snuggly mammal when it's sitting on your plate, but if we're going to kill them, shouldn't we do our best to be responsible from ice floes to plate?

This isn't to say eating seal is always considered taboo. In fact, a number of Montreal restaurants, like Les Îles en ville, serve seal as a delicacy. Donald Painchaud, "proprio-serveu" of Les Îles en ville, says that in the Magdelen Islands, where he's from, seal is the status quo. "Here we do a special recipe for roast seal with brandy and cranberry sauce. We also have seal filets, sausages and terrines," he says. "It's a different meat, but if you like different, wild meat, you'll like seal."

With a taste that is equal parts gamey and fishy, with a texture comparable with veal and duck, seal is a very dark meat which is surprisingly low in fat and rich in iron and Omega-3. In 2006 the world's first seal cookbook was launched in Sweden, and popular seal recipes include seal tartare, seal stew, baked seal meat and of course, Newfoundland's own seal flipper pie.

Traditional seal hunting has long been practiced by the Inuit, and seal meat is a dietary staple, the gamey meat keeping hunters warm and strong. In 2009, Michaëlle Jean controversially showed her support for the Canadian seal hunters in Rankin Inlet, Nunavut, by gutting a dead seal and eating its heart.

In the DFO's 2009 plan for the slaughter of 220,000 seals on Sable Island, the proposed method of disposal for seal carcasses involved incineration in mobile crematoriums, or transportation via tractor-trailer to a Nova Scotia landfill. If that's the alternative, then maybe eating seal meat isn't as abhorrent as we first thought.

One thing's for sure: while seals definitely win the cuteness contest, cod has a better chance at taking the gold for most delicious. --Michaela Cavanagh