Why I'm cancelling my subscription 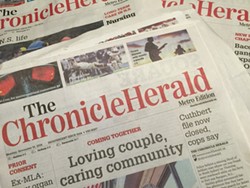 I am a 25-year-old subscriber to the print edition of the Chronicle-Herald—a rare breed these days.

I became a new subscriber back in the spring. I was excited. I woke up every day looking forward to reading a new edition of your independent and comprehensive news coverage—delivered right to my door! I enjoyed being informed and up-to-date about municipal, provincial and federal issues. I felt connected to my community, my city and my country in a way I had not before.

But unfortunately, I am cancelling my subscription.

When I found out on November 1 that you were laying off 20 employees—about 25 percent of your newsroom—I was shocked. But when I also found that you were using these layoffs as a scare tactics to strong-arm concessions from an already overworked staff, I was disgusted.

Times are tough. At least, that’s what everyone keeps saying. And it sounds like you’re having your share of difficulties considering that you instituted an online paywall back in August 2013. And then of course, back in October, there was that whole fiasco about the opt-out scheme for the Herald Magazine. A lot of people were pretty upset about that one.

But this has gone too far. I just can’t do it. I can no longer continue to financially support a newspaper that so blindly pushes forward this anti-worker austerity agenda.

As a young person, I can no longer continue to support a newspaper that downloads its financial burden onto it’s youngest and brightest staff. A newspaper that announced the layoffs of Selena Ross and Frances Willick, who won a national award for reporting on Rehtaeh Parsons, at the very precise moment when Canadians realized that we need more dedicated journalists willing to step up and speak out against rape culture.

And finally, I can no longer continue to support a newspaper that is willing to cut costs, lay off workers, and slash their newsroom at expense of its very mission—delivering quality, comprehensive and relevant news reporting.

So long, Chronicle-Herald, it’s been a nice run.