From 7,400 kilometres of coastline to hundreds of climate warriors, we’ve got what it takes. 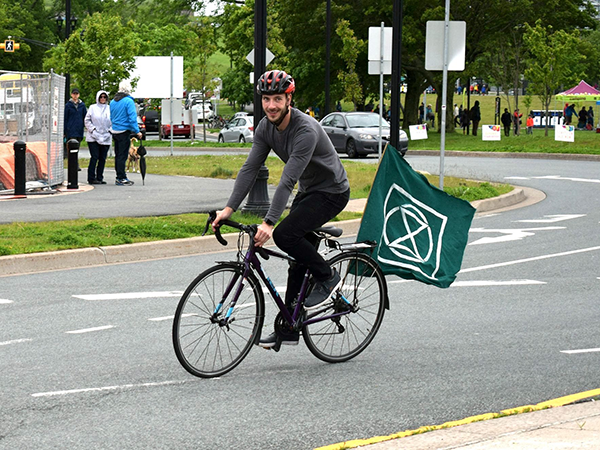 Nova Scotia is a perfect battleground for the fight for climate justice. This place is not characterized by ease or sensationalism. The ways that our gentle hills rise from our 7,400 kilometres of coastline became spectacular to me only after years of reflection. The wealth of plant life that inundates everything only became remarkable when I'd seen the desolation of the wildfires in the west coast or the baked cityscapes of the Greater Toronto Area Megalopolis.

The Nova Scotian character is the perfect atmosphere for climate action. This place is old and its memory is long. Our people and communities have been divided and sectioned and atomized to exploit us against our best interests. The climate crisis demands that we acknowledge the age and richness of our places while we work to share that wealth with those in the world who will have no place of their own. There is no us or them on a dead planet, only yet another extinct species.

To work against this crisis, Extinction Rebellion Nova Scotia is participating in a week of action from September 20-27. We will show the world that while we are one of the most impoverished provinces, this is not because we are poor but because our place is rich and our people have been distracted by meaningless differences. Together, we will rise up in a general strike on September 27 to use our power as citizens of the world to fight this culture of greed and abuse with love and unity. I urge Nova Scotians to join us not only in the general strike but in a week of action starting September 20. There will be die-ins, occupations, blockades and parties.

Climate action is necessary here because of our unique position as a green energy powerhouse. Nova Scotia emits about 18 million tonnes of carbon dioxide equivalent per year. Canada's emissions are about 716 million tonnes. Our oil and gas industry accounts for about 185 million tonnes of those emissions. This means that it would take 10 Nova Scotias to stop emitting to offset the emissions of that one industry. All of us and our divisions and struggles and history amount to 10 percent of the industry that will lead to our extinction.

This may sound disheartening, but it is an amazing opportunity. We live in a land where the wind (practically) never quiets, where the tides rise and fall predictably, where we could shut down fossil fuel-powered plants and build sustainable options to show the world that we don't need those 185 megatonnes. We must share this wealth with some of the UN-estimated 300 million climate refugees who will need a new home by 2050.

However, to be that example we need to look past our divisions and squabbles and realize that we all share this climate. Nova Scotians have a precious gift as citizens in this place, together, and we need to rise up now to fight for life rather than greed.