After marathon public hearing, council's final decision on Quinpool Road tower is deferred in favour of yet another staff report. 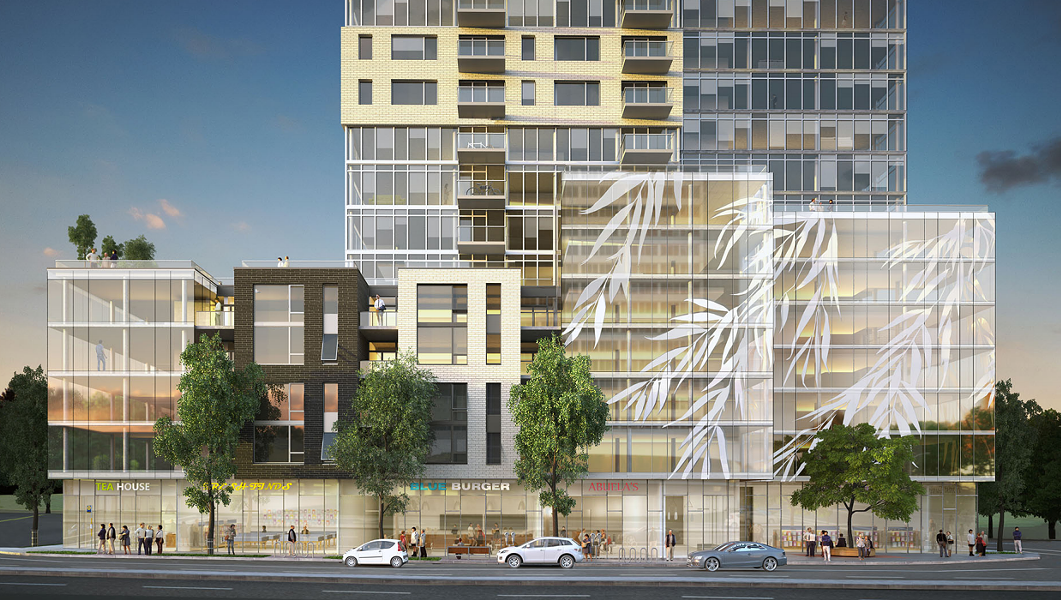 It’s either a landmark building that will put food on the tables of Halifax’s working-class, or a shakedown that’s anathema to positive urban design. who you ask.

Over 40 residents, planners and friends of the Common attended a public hearing Tuesday evening at City Hall to speak out both for and against Armco’s Willow Tree proposal for a mixed-use tower at the corner of Quinpool Road and Robie Street.

Armco’s property wing, APL, has tussled with planning staff over the development since it was first proposed in 2014. Originally the developer wanted two towers of 22 and 11 storeys on a shared podium. Planning staff opposed that design’s height, mass and density. So APL came back with a revised design upping the height to 28 and 12 storeys, respectively.

The company eventually settled on a single 29-storey tower, which the previous city council approved (against the recommendations of staff). After the 2016 election, that was pruned back to 20 storeys to fit planning guidelines as set out in the draft Centre Plan.

Recently the developer announced 20 storeys isn’t financially viable given the cost of demolishing the site’s current 10-storey structure. Instead, it wants permission to build up to 25.

Which brought us to Tuesday night—a public hearing that was supposed to be about one height, but a conversation that was dominated by five extra storeys.

Spokesperson Adam McLean told that 20 would be too “understated” for such a “landmark” corner. The developer also tried to sweeten the pot by promising 10 affordable housing units should the building be allowed its larger height. The remaining units would rent for anywhere between $900 to $1,400.

Quinpool Road business association general manager Karla Nicholson said her board “unanimously agreed” with the developer that the building “looked far more distinctive at 25 storeys as opposed to 20.”

“God forbid somebody would make money in this town,” said Gaudette, who accused planning advocates in the Willow Tree Group of having an “anti-business bias that ignores basic economic realities.”

But the majority of the crowd was against a project they said would tie-up traffic, increase shadows on the Common and ruin the feel of a largely low- to neighbourhood.

More importantly, for some, was the contempt shown for the municipality’s planning process and the ease with which some councillors seemed ready to ignore the work already poured into the Centre Plan.

“Why shouldn’t we give [the rules] a chance to work in the Centre Plan area before we allow our proposals to break these rules?” asked Jenny Lugar, a planner with Our HRM Alliance. “I think we need to have confidence at this moment in the planning process.”

“Does this tell the public that once we adopt the Centre Plan in full, that these rules only apply until they’re inconvenient for somebody?” asked her colleague, fellow urban planner and Metro columnist Tristan Cleveland. Something he says has already “soured the conversation in this city about development.”

Council reconvened Wednesday morning to once again discuss the issue, during which several councillors poked holes in the arguments presented the night before.

“We’ve been given no numbers,” said Sam Austin, about APL’s financial worries. “I don’t think that’s relevant to our decision. So it comes down to whether or not we think the form here is appropriate.”

A final verdict on Willow Tree was eventually deferred, pending yet another staff report on the appropriateness of 25 storeys and whether APL’s promise of affordable housing is enforceable. That document won’t be back until March 20.

In the meantime, has to refrain from any discussion or correspondence on the subject of Willow Tree. A welcome silence for some.

“This has been a three-ring circus,” said Tim Outhit. “I’m very, very disappointed.”