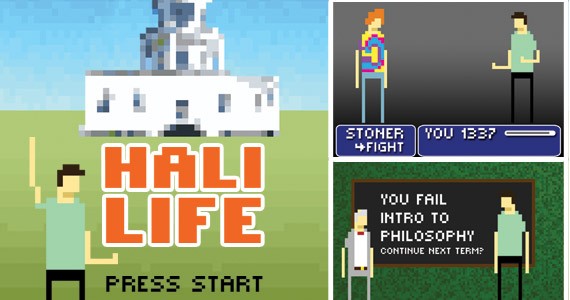 Ryan Chisholm
If you reach level 100, you get to fight your student loan officer.

Welcome to Halifax: The Game.

You are now plugged in, turned on and ready for life as a Haligonian. It's not the easiest game in the world, but it certainly is a great deal of fun. Some things to remember as you play:

• This game has no save file. You can't restart halfway through.

• This game has no true multiplayer. Although others are playing along at the same time, you control your own destiny here.

• Finally, everyone will play the game differently. You may get advice from others, including some tips from this guide, but each experience is wholly unique.

Halifax: The Game is split up into different levels or worlds or chapters. Each one presents new thrills for you, the player. They are explained below.

Having a place of your own is stressful, hectic and can be fun, too. All the more so depending on how you answer the question of to roommate or not to roommate.

Things to do in this level of the game
You need to establish a home base, collect resources and defend yourself against pests such as mice, ants and annoying neighbours. If you've played StarCraft, Age of Empires or any number of RTS games, you know the deal.

First of all, you need to find the right place to establish your base. This is one of the most crucial aspects of making your home here in Halifax. It's a good idea to find somewhere close to resources you'll be collecting later: Groceries (veggies, frozen dinners, Kraft Dinner), Entertainment (video games, rentals from Video Difference) and Booze (beer, hard liquor).

Putting your base close to other areas that are important to you---such as your nearby campus---or that have a high percentage of resources may be more expensive, so pick your spot wisely.

It's good to have a small stockpile of resources at all times. For example, you'll never go wrong with Groceries: 120; Entertainment: 55; Booze: 300.

You use these resources to upgrade your home and make your stance in the larger city. Upgrading your home means you'll have less money to spend on resources. It's all about finding the right balance. Getting a part-time job or a trust fund from mommy and daddy will greatly help you here.

Let the game begin
Add furniture, computer, TV, et cetera. These items will cost precious resources, so be careful not to overspend.
G: 95 E: 38 B: 277

Or you could try to steal your neighbour's wifi. OH NO! You've caused a turf war with the next-door stoner!

Direct hit to his buzz.

VICTORY. Neighbour stoner has been defeated. But was it worth it? Your resources are much lower than before.

Power tips
Living on your own is awesome, but there are new challenges you'll need to face. Strategize, be smart with your resources and you might just come out on top.

Super University Bros.
Going to any post-secondary institution is sort of like entering a surreal new world, much like Super Mario Bros. In the Mushroom Kingdom, you have to jump across endless obstacles (squishing enemies as you go) in order to reach the end goal, which is rescuing the princess over and over again from Bowser. No matter how many times you rescue her, she'll get captured again.

Well, it turns out in University Kingdom, the game plays very much the same way, year after year. Enjoy!

Year 1: University Kingdom
Things are going smoothly until you find out that Dr. Bowser has taken the Princess Exam and hidden her far away in a castle. Your job is to find and free her before the time runs out and everyone goes home for the summer.

The first year is relatively easy compared to more advanced levels, but don't take things lightly, the tutorial (high school) did not prepare you for this. You can either jump onto or over papers and required readings, but if you miss too many you could do damage to your GPA meter. If that gets low enough, you may have to start the game over, something nobody likes to do. Your experience here will vary depending on which world you decide to enter.

Liberal Arts
The Liberal Arts world is a popular choice for many gamers due to its inviting surroundings---colourful, fluffy and idealistic--- but don't be fooled, the levels within can be extremely challenging and have been known to drive players insane or down a spiral into obscurity.

Common enemies you'll find on your path include: Platos, which are usually found in cave levels; Chomskys, small gnomes that make you feel stupid and Shake-a-spears which throw their spears into the air when you try to jump over them.

Science
Dark, blocky and cavernous, the science world is primarily underground, and the principal challenge for players here is to find the light within the darkness. This often involves breaking through blocks of various elements and chemicals in order to move to the next stage.

Common enemies are: Darwines, a continuously changing lizard-like creature that can sometimes fly and sometimes swim depending on its surroundings; Newtonians, which throw apples towards the player's head and the Bunsen dragons, which blow fire at those who aren't cautious.

Business
In the business levels, the world is continuously moving forward. There isn't as much time to evaluate the best choice to make or on which platform to jump to, as the boundary behind you keeps advancing rapidly. It can be stressful but also exhilarating for those with a competitive streak.

Common enemies are Keynes that jump out of the air, take your coins and give them to others and Marxians who surround themselves with pickaxe wielding minions to block your path. Krug-man is the final boss before Dr. Bowser and will attempt to hit you with a tax hammer---blissfully jump over him to win.

Power tips
The following years of University Kingdom remain fairly similar to Year One, but get more difficult to progress through each time. You can try to beat your previous high score by going through a masters version of the game with a much higher difficulty setting.

Nightlife World
Welcome to the dark alternate reality level of Halifax. This is the shadow world, where everything looks somewhat the same, but changes. The enemies are stronger, the power-ups are fewer and obstacles pop up at every corner.

It takes lots of time and experience here before you can truly be called champion of the bar realm. You can chose to be a warrior, bard, mage, thief or ranger---each has its own strength and weaknesses. Your alignment is another aspect you decide from the outset anywhere from Lawful Designated Driver to Chaotic Douche.

You will need a good diverse party to make it through the dungeons. Going alone is a fool's errand.

Stage 1: Restaurant
The first level in this world is fairly simple, almost like a tutorial. Be sure to eat at this stage, because you won't get many other chances before the final boss battle. Split an appetizer (+3 stamina). Order entree (+5 alcohol resistance). Tip server (+2 charisma).
You've LEVELLED UP!
You are now a lvl. 23 Haligonian!

Stage 2: The Line
Waiting in line to get into a bar/pub/club is a slow grind. Be ready to regenerate your energy bar if needed, especially if you are traversing through the winter world, which will require at least enhanced plate mail or a Fire-Mage robe. If you are patient and make it through, you'll receive several upgrades. (+2 cold resistance) (+4 crowd defense) (+7 bouncer buffer).
You've LEVELLED Up!
You are now a lvl. 24 Haligonian!
Bonus item unlocked! Bar Bracelet (receive +3 armor)

Note: If you are underage and get caught by the dungeon keepers (they are sometimes called "bouncers" in this realm), prepare to take a devastating hit to your stats. (-12 Confidence) (-24 sex appeal) (-53 good times).
Oh no! You've been kicked out.... Please come back when you're ready, adventurer Stage 3: The Pub

These areas require dexterity and cunning in order to traverse their cramped corridors. Thief classes do well in these establishments if they keep a low profile. Warriors and Berserkers sometimes populate the pubs, and when mixed with strong ale, can become easily angered. The best solution is to buy everyone a round to lower tempers.

Adventurers should be prepared to hear tantalizing Bard music as well---it can help a player receive many stat increases (+5 magic) (+2 wisdom) (+3 dancing).
You've LEVELLED Up! You are now a lvl. 25 Haligonian!

Stage 4: The Bar
Crowded, lots of booze flowing and potential for foul beasts at every turn, those who travel here should be cautious, as every drink of ale reduces your abilities and leaves you more vulnerable.

However, there are ways to get through these dungeons and gain valuable experience dance with fellow patron (+7 confidence), get phone number (+10 charisma), throw up (-15 prestige), don't get thrown out (+20 luck).
You've LEVELLED Up! You are now a lvl. 26 Haligonian!

Final Boss: The Dome
This is the last level of Nightlife World, and by far the most difficult for any adventurer.

You may be tricked by other adventurers who say that they're only going to the upper level, known as Cheers, but it's a trap. Once you enter, you can never overcome the magnetic attraction of The Dome.

You'll need a considerable amount of gold, as the drinks magically evaporate quickly. If you come out standing, you win the game, but you'll need all of your skills to prevail. Avoid bar fight (+7 righteousness), avoid STI (+15 hit points), get all party members out safely (+18 protection).