On its seventh album In the Land Of, the band explores the great outdoors as well as its internal psychological land. 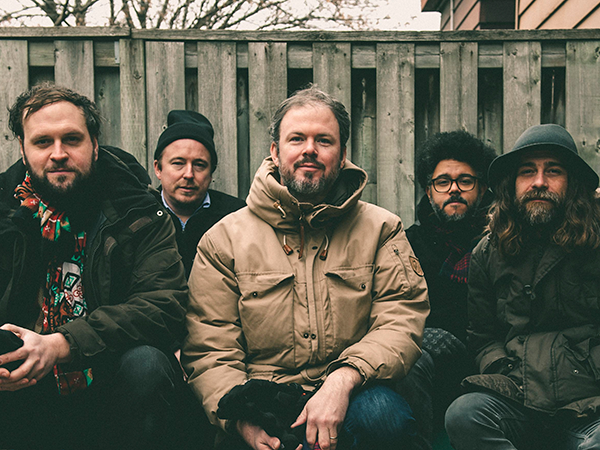 A decade after the hit single "Weighty Ghost," Wintersleep found itself with another massive hit on its hands with "Amerika," from 2016's The Great Detachment. But heading back into the studio to make the followup record, it was business as usual for the veteran indie rockers—there was no great search to make another hit single and capture lightning in a bottle again.

"It's so beyond what you can really control," says lead singer Paul Murphy before a show in Hamilton, Ontario on the current tour, which stops in Halifax for a pair of shows this weekend (Friday is sold out). "We've done songs that are like 'This song should be a fucking hit song' and then nothing even happened. And then there's always songs where it happens and it's so hard to control."

The Wintersleep way involves working on material for a couple years, making enough of the good stuff to put together a record and then running with it. "There's always a point where it's like, alright, we have enough, let's do it," says Murphy. "So that's the spirit of our band, making good records that feel good to us and if something cool happens with one of the songs—and obviously you want songs that have the possibility for that to happen."

In the Land Of, like the purposely open-ended title suggests, covers a lot of ground literally and figuratively. Benefitting from being a settler on unceded land, descriptions of areas targeted by western drone strikes and yearning for rural Nova Scotia are just a few of the areas explored on the quintet's seventh full-length album, out March 29.

"I think I always come from a personal place with lyrics," says Murphy, acknowledging the transient lifestyle of a musician had a role in exploring the idea of land for this record. "I think everyone can connect to it on some level for sure. Some of it's geographical, but it's also more psychological land as well, and emotional land. It's not just about actual, physical land."

In classic Wintersleep fashion, the album has moments that sound dark and heavy; others feel uplifting and ready for a sing-a-long, even if the poppy chords don't line up with the subject matter—the single "Beneficiary" starts off with the lyrics "All my days I wake up, open my eyes, beneficiary of a genocide." Those are some heavy-hitting personal reflections for a single.

Near the record's end, on "Terror," those title words are repeated in a jarring tune. The song is based off the Instragram account @dronestagram, an art project by James Bridle with aerial maps of land in the Middle East hit by Western drone strikes. "You get the sense that they don't really know the amount of people, the amount of civilians that have died," says Murphy. "There's just something about the aesthetic of it that's very effective."

For Wintersleep fans who have been there since the early days of the mid-00s, there are some consistent themes and little nuggets that link the new record to the self-titled debut. The most obvious example is the new song "Forest Fire" referencing the lyric of "I'll be a forest fire" from the debut LP's "Orca."

"You have so many records and you have lines that remind you of other songs that you've written and then kind of tie them in to the newer song that maybe it's not about the same thing but you're kind of connecting it to a past song," says Murphy. "There's a vocabulary that kind of exists within Wintersleep and all the records, and they do all kind of correspond in one way or another."