The Marquee is reopening this weekend and it all starts with a Wintersleep bang on Friday. 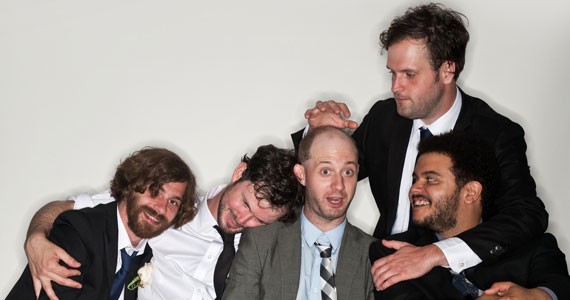 Wintersleep reopens the Marquee on Friday.

Wintersleep drummer Loel Campbell was barely of age when he started going to (sneaking into) rock shows at the Marquee Club on Gottingen. He remembers Yarmouth rock giants Burnt Black playing a New Year's Eve show where he met future Wintersleep bandmates Paul Murphy, Tim D'Eon, and by extension, the energy and brains behind Dependent Music---the little label that curated raw east coast acts like Contrived and Holy Fuck. He was 15 then.

Now, Campbell and Wintersleep are headlining the grand reopening of the Marquee on Friday. Unable to sustain 4am closing times every night under its cabaret license, the Marquee shuttered its club operations in 2008 and has reopened only for occasional events like the Halifax Pop Explosion. Victor Syperek, owner of the former club, announced last fall it would reopen as a regular venue: they've finally secured their lounge license and brought back local promoter Greg Clark to book the shows.

"Greg was one of the first people to to get us shows when we were in Halifax," says Campbell. "I'm very excited to play the reopening." It's doubly special for Wintersleep since it marks the 10-year anniversary of the band's first CD release party at the same venue. "It's very appropriate. It's a real venue. Halifax needs something more consistent," says Campbell. He's thrilled to see Always, who will open the show and feature the vocal talents of Molly Rankin (yes, she's connected to the Rankin family). "Alex from Always sent me his Soundcloud...I was really blown away by them. There are only four songs but I never got sick of them. So we wanted them to play---it reminds me of when we used to curate music at the Marquee."

This show marks the last stop on home turf before Wintersleep crosses the pond to do a set of touring dates in Europe, but Campbell says the band intends to return to Nova Scotia for at least a summer festival.

As for the venue that was so formative for him and many others---he hopes to see it restored as the hub of the music scene in Halifax. --Rana Encol