How singing for the sake of singing became a holiday tradition that’s kept Maria Bartholomew’s family carolling for neighbours and strangers for 35 years. 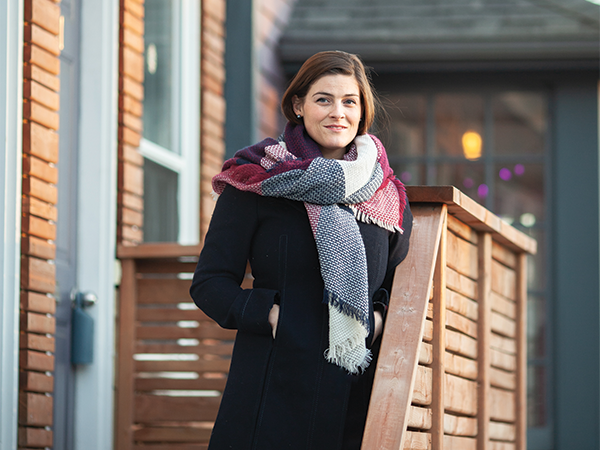 There aren't many instances where welcoming a group of 12 strangers into your living room—wet boots and all—makes sense. But on a cold December night last year, Maria Bartholomew, her brother Steven and their friends accepted such an invitation, no questions asked.

"Don't worry about your shoes, come on in," said the man, tears in his eyes, after the group finished singing a Christmas carol on his doorstep.

The next thing they knew, they were trudging through his typical Halifax home all the way to the living room where his ill wife laid in bed. "She wanted to go to a Christmas concert but she couldn't go and...now you've come," he said in disbelief.

Gathered around her bed and spilling out into the hallway, the bundled singers sang "Away in a Manger"—by request—and "Silent Night." The woman held her husband's hand, listened intently and, periodically, sang along in a whisper.

"You could see kind of their life's history on the walls, there were all these black-and-white photos of them as young people, their wedding picture and then their kids as little kids, as we were singing, we were seeing the history on the walls too," says Bartholomew. "We just walked into a stranger's house as if it was the most natural thing in the world. Some of us took our boots off, some of us didn't. It was just like, what's more important, the dirty shoes or just being there?"

While this magical encounter was one of a kind for Bartholomew, it was far from the first time she'd brought humble good cheer to a stranger. It's something she's done every single year as far back as she can remember—belting out "We Wish You A Merry Christmas" from her father's shoulders throughout the neighbourhood before heading home for more harmonies and hot drinks. Though the tradition, now a part of her family's fabric, has had her singing on doorsteps in Ottawa, Kingston and London, Halifax is where it all began.

It was Christmas 1985, when her father—then a young Navy officer—and some of his friends hosted their first carolling party at their flat on Oxford Street. "It wasn't a drink thing. It was just, go out to the community, sing carols door-to-door and then come back for hot wassail and goodies and keep playing piano," says Bartholomew. "My mom ended up being one of the people there, and that was the night she fell in love with my dad."

By the following Christmas, they were married. For three years they continued carolling in Halifax, before taking the tradition to the various Ontario cities they moved to, their family growing to eventually include four children. There was never really a reason for it, it just felt good, a feeling that was contagious. Last year—the 34th—the Bartholomews' carolling night hit the streets of London with over 40 singers.

The carolling came back to Halifax three years ago, when Bartholomew and her brother (a Navy officer, too) both moved east. Since then, the siblings have doubled up, walking neighbourhoods in both London and Halifax every holiday season, letting their voices lead the way. Bartholomew recounts stand-out moments like singing to people waiting for their tow-truck after a car accident, surprising convenience store employees with a flash-mob-esque performance, being welcomed in to a house party and having a random dog-walker join the troupe on its route after a serenade.

"There are less and less spaces where music happens kind of organically, or people just have permission to sing," she says. "And I think there's something fun about doing something without a quote-unquote 'purpose.'

"We're losing the sense of play and joy and just being. And doing good things for the sake of it, trusting that there's gonna be ripples out there—but you don't know what they're going to be. And that's part of it, I think the joy of letting it go without it being like, I'm doing this for this specific outcome."

This year, both of Bartholomew's parents will make the trip to Halifax, to wander the streets where their story began, knocking on doors and singing the harmonies they've been perfecting together for 35 years. Bringing a little glimmer of joy to unsuspecting Haligonians will be a full-circle moment for their family. Washed down with wassail, of course.

"Putting yourself out there and putting good things into the world is a good thing. There is parts of it that are maybe risky or scary, but maybe in this tiny little way by doing something like carolling—why would you go carolling in a random neighbourhood for random people?—there's also this kind of act of bravery," says Bartholomew. "Just showing up in the world and doing your thing. Maybe then that encourages other people to do the same in their own way, carolling or not."