After being featured at the Seaport Cider & BeerFest, the Maine Beer Box will head home packing Canadian brews. 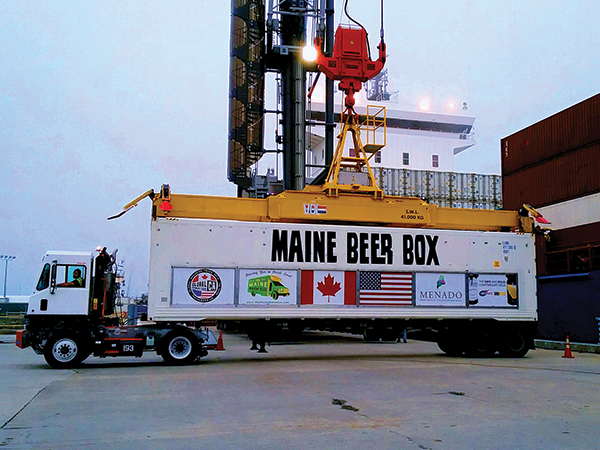 I f this were a YA novel, it'd be The Sisterhood of the Travelling Beers. This weekend, dozens of Maine-based breweries are coming to the Halifax Seaport Cider & BeerFest. Even more are sending booze via the Maine Beer Box: a huge refrigerated shipping container commissioned by the Maine Brewers' Guild in 2017.

"As grandiose as it might sound, it's kind of exporting the collaborative goodwill," says Sean Sullivan, the executive director of the Maine Brewers' Guild.

The Maine Beer Box is at the centre of an ongoing marketing project, allowing "a global exchange of beer between brewers." It's been all the way to Iceland for an event in Reykjavik and, last year, it made the trek across the pond to England. Now, Nova Scotia is the box's next stop, where its 78 taps will be flowing in time for the BeerFest's 13th annual event.

"Because of this geographic proximity, there's a real opportunity to create some great relationships, professional relationships between our brewers," says Sullivan.

Brian Titus, festival co-founder and organizer, says Maine breweries have been participating in BeerFest since the beginning. When the Beer Box project was announced, he was immediately interested: "For me, it's the reciprocal component that makes this really exciting."

"Because of this geographic proximity, there's a real opportunity to create some great relationships, professional relationships between our brewers."


Once the Maine Beer Box has been emptied, it'll be time to fill it back up. The hope is that the shipping container will be ready to head back to the US by the fall, taking a slew of beers from Nova Scotian breweries (and other parts of Canada).

"The question has been asked: If you're a local producer, why are you bringing a great big box filled with Maine craft beer?" says Titus. "There's just some phenomenal networking that's gonna come out of this."

Despite the international offerings at this year's BeerFest, Titus says the festival didn't dial back on local products. In fact, there will be about 190 beverage choices from close to home. Some of this year's trends include brute IPAs and rosé ciders. Since the cider component has continued to grow, it will be part of the event name from this year forward. "It is a reflection of who is coming to this to sample," says Titus, "and also who's coming to this to sample on the other side of the table."

Seven crushable cans to fill your cooler with

How to quench your thirst in a COVID-19 world