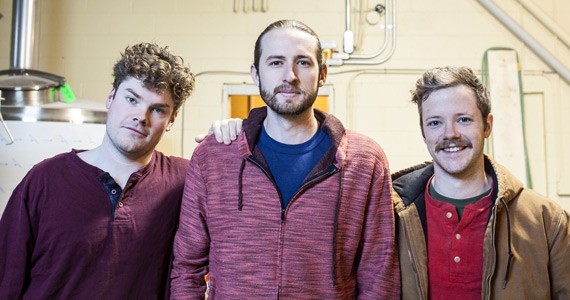 The relationships you have with your college dormmates can go one of a few of ways—the classic (and often unintentional) post-grad fade-away, the hollow "we really should get together sometime," or the unbreakable bond that only geography gets in the way of.

For Queen's alumni Angus Campbell, Josh Counsil and Doug Kehoe, it was the very real "let's go into business together" kind of friendship. "Friends first, business second," as Counsil puts it. Scattered to different parts of the continent working as engineers, the trio had long intended to collaborate on something, but it wasn't until hobby homebrewing came into the picture that they considered beer.

"It was kind of convenient because we'd all coincidentally fallen into craft beer scenes, almost naturally, on our own," says Campbell, a Cape Bretoner who takes responsibility for selling his pals on Halifax as a location for Wrought Iron Brewery.

"It's an industrial process at its core. We studied chemical engineering, so there's stuff that we can get behind," says Kehoe, of why craft beer made sense. "All the learning, and excitement of doing that craft, that makes it fun for me. It's sort of a scalable business, you can make it the size you want it to be, and it's a people centric business, too. And people drinking beer are generally having a good time. "

Last summer, after a couple of years of plotting, they moved into 2736 Robie Street and started working on what will be their brewery, and eventually, their Breakhouse-designed taproom. Amidst inspections, renovations and equipment-testing, Wrought Iron's retail store is still on track to open in April, with the bar to follow this summer. The starting lineup of brews will include a pale ale, a stout, a gose and a steam. "Our palates are so diverse," says Counsil, who likes his stouts soul-crushing. "So we decided, let's just be the guys who make beer that we like."