The kids are alright.

"Anybody had sex in the new library yet?" one user asks. "So not ready to be an adult" reads another Yak.

Yik Yak is the free mobile app currently causing panic in news articles across the country. The anonymous service allows anyone to publicly post their thoughts, and read what others within a 2.5-kilometre radius have also posted.

The app is mostly used by college and high school students, which has led to problems like rumours, cyberbullying, bomb threats and warnings about potential school shootings.

Things are a bit more mild in the Halifax Yik Yak community, though. After reading this CBC story of further calls to ban the app in schools, The Coast decided to check out what all these crazy kids were up to. Since 2.5 kilometres basically covers the entire Halifax peninsula, it's a wide sample.

As you can see, it's less bomb threats and more complaints about finding a comfortable place to poop. Users lament relationship struggles, early mornings and the miracle of naps.

Have a look for yourself at our favourites below, or download and start Yak'ing yourself. 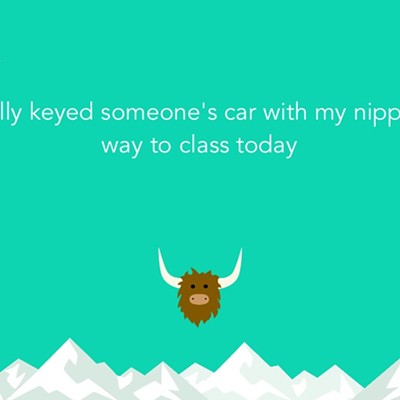 Voice of the city: Making the case for play

What is the biggest determinant of achievement in education?