Namastay loose in the club with these venue-friendly poses. 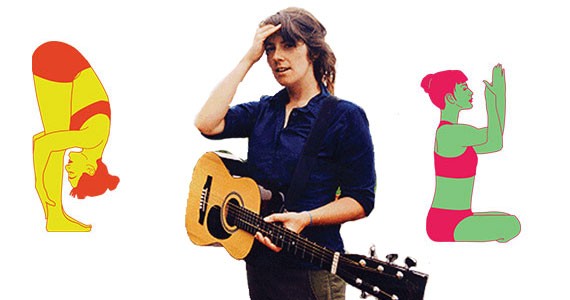 Julie Doiron is best known for making broken hearts feel better through song, but she wants to relate to the whole self. "I'm always trying to make people feel good in their bodies," she says from her home in Sackville, NB. "That's my obsession." Doiron has been practicing yoga since 2003 and teaching since 2011; trained in ashtanga, yin, restorative and vinyasa, she teaches up to five times a week at Nava Yoga in Sackville. When not teaching and parenting, she is a Canadian music icon. This week's IDOW sets will be solo events (hint: Think of requests). Her new album with The Wrong Guys will be released in the fall. "I've chosen yoga," she says of her other job, "because it's something that makes me feel good and I know I can help people to get there. Our bodies are capable of so much but we're all walking around in pain the whole time." Here are a few poses to get you through the rigours of a festival (always check with your doctor before beginning a new fitness regime):

Forward folds “If I’m in an audience and need to stretch, I’ll go toward a wall. I’ve never been too shy about my body in that way but I’m aware others are, so I’ll point my rear end toward a wall.”

Eagle arms “If you can be discreet.”

Chair pose “Just to stretch out your hips.”

Mountain pose “I make sure I’m standing hip-width apart, standing with awareness in all four corners of the feet. One of the things you end up doing at shows is shifting from side to side. I try to remind myself to come back to mountain several times a day.”

Bonus tip for artists: Sun salutations “I’ll do them to warm up my body and get energized about playing. You’re not supposed to do sun saluations at night, but we’re not supposed to be up playing a rock show at 2am either, if you wanna get strict about health.”