You Again stays true to its title

If nothing else, this You Again can’t be accused of false advertising. It’s all right there in the title, two words that will float through audience members’ heads each of the many times this would-be comedy delivers a reheated gag or cliche originally served in another, better movie. Marni (Kristen Bell) is mortified to learn that Joanna (Odette Yustman), who made her high school life hell, is about to become her sister-in-law. Marni’s mother Gail (Jamie Lee Curtis) urges her daughter to let bygones be bygones, until Gail’s own high-school rival---Joanna’s aunt Ramona---arrives on the scene, setting up a multi-generational pissing contest. The cast does their best with the telegraphed punchlines, pratfalls and corny speeches they’ve been given, but they’re powerless against the inept script.

You Again is not showing in any theaters in the area. 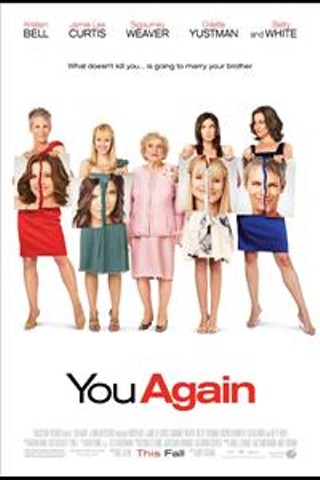