Young people are fired up for the federal election

As the largest voting block for the first time in 50 years, the youth are here to be bold at the polls 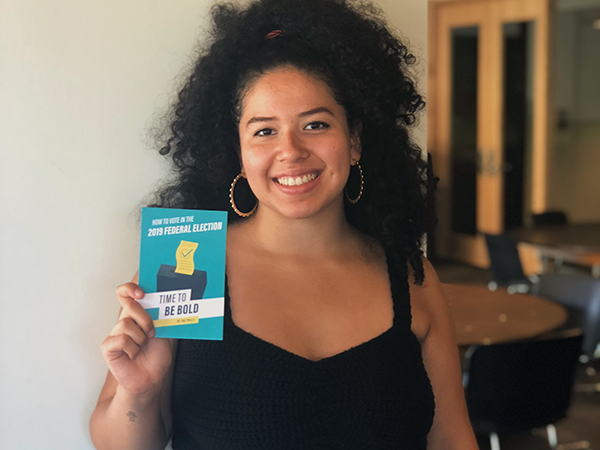 T his year, for the first time since the baby boomers, youth and students are the largest voting block in Canada. All over the country young people are pushing back against the narrative that we are apolitical. Many young people like myself are becoming increasingly involved in politics and are actively organizing around issues that matter to us. As a Dalhousie student, working as a summer intern with the Canadian Federation of Students' Nova Scotia office, I know that students are feeling the impacts of student debt and the climate crisis and are ready to mobilize.

Hearing about the effects of climate change is one thing, but experiencing them is another. The Intergovernmental Panel on Climate Change (IPCC) has stated that if we don't limit global warming to 1.5 degrees Celsius by the year 2030, we won't be able to curb the runaway effects of climate change. As the child of South and Central American parents, I have seen first-hand how communities in the Global South are disproportionately affected by climate change. Water shortages are becoming increasingly common in certain areas, while increased flooding is affecting quality of life and agriculture in others. As the biggest producer of waste on the planet, if Canada does not act now, these issues will not only get worse, but create unlivable conditions—not just in the Global South, but all over the world.

The effects of climate change contribute to the migrant crisis, and instead of real solutions, we are seeing leaders attack immigrants. Alongside the implementation of concentration camps in the United States, Canada's immigration policies are being rightfully critiqued. Canada upholds the Safe Third Country Agreement, which states that refugees cannot claim asylum in Canada if they have previously been in the US, a country deemed "safe" for refugees. It is obvious that the US is unsafe for asylum seekers and Canada only enables these abuses by upholding this agreement.

Without the issues of immigration and climate change being fundamentally addressed, incidents of racism and xenophobia are becoming more apparent. We're seeing the normalization of alt-right and white supremacist rhetoric—this election is not exempt. Our culture, in Halifax and in the wider Canadian context, tends to minimize issues of racism and oppression, claiming it's an American problem. This couldn't be further from the truth and we must take action here and now.

This upcoming election, students have come together around four issues: climate change, student debt, fairness for international students and Indigenous peoples' access to education. Students recognize the long-term effects of rising student debt and climate change. At the same time, Indigenous learners are being denied their right to education and international students are paying fees quadruple the amount of domestic students. It is clearer than ever this election could easily dictate the future of our generation. These issues are not isolated from each other. Candidates must realize that we are voting for our future.

Heading into the school year, I know that mobilizing and engaging other young people in the election is critical. We're the largest voting block for the first time in over 50 years and have the power to make our issues election issues. We have less than 11 years before the climate crisis reaches catastrophic levels, we are seeing the normalization of racist rhetoric and hate speech and students are being forced to take on more debt than ever. We need bold solutions. I encourage everyone to engage this election, talk to your friends and family and be bold at the polls.