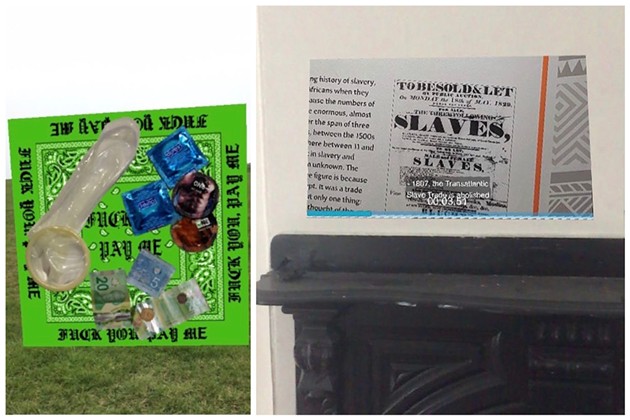 Works in the show the UNSEEN are projected through your phone's camera, to be seen in your immedate surroundings.
the UNSEEN
LARGE app (download from App Store and Google Play)
until Dec 12, free

At this point, the palm of your hand is a window. Through it, you track your takeout and online shopping sprees as they hurdle along roadways to your door. You use it to swipe through potential movies—and potential dates. It keeps you up to speed on the world, bolting through timelines filled with friends and random strangers posting #nofilter shots of aesthetically perfect lives.

This is exactly what awaits when you download the LARGE app onto your phone and use it to explore the UNSEEN, the Centre For Art Tape’s new, virtual exhibition. Parse the HRM area of the app’s map (found in the top right hand corner of the app), tapping on colour-coded pins and your camera screen—your palm’s most streak-free window—becomes populated with art by Wren Tian-Morris, Merle Harley, Annik Gaudet, Carrie Allison and Israel Ekanem. The five mini-exhibitions taking (virtual) place in various parts of the city deliver works ranging from digital collage to film while tackling topics ranging from systemic racism to queer culture—all viewable to you while you shelter-in-place.

The duality of being able to access the art from anywhere—but having it moored in cyberspace through the app’s map—was something that really let mixed-media artist Wren Tian-Morris play with their works’ themes: “I thought it was really funny that the way that you would see it, it shows up is that it’s within a 10 kilometre radius,” they say, speaking by phone. “Which made me think of Grindr, the gay dating app, which shows how close someone is to you. So I was thinking a lot about that and was trying to link very physical forms of cruising versus dating apps and blending it in a fun, virtual space.”

Tian-Morris's work in the show—like images of a pair of jeans’ back pocket with a hankie hanging out (a nod to the sexual-signalling hanky code of the ’70s and ’80s, see above image)—“focuses a lot on queerness and sexuality and gender, hopefully in a fun way,” they explain.  Pieces are pinned to parts of Halifax that have a historic significance in the gay community—like at the old Turret club (one of the city’s first gay bars) or Citadel hill (an infamous site for cruising). “Queer history is important because of the fact that it’s one of those histories that’s often erased or ignored and it’s something that’s kind of hard to come by,” they add. “You’re not taught queer history—at least in grade school—so it’s very word-of-mouth or you’re digging it late at night or in libraries: Searching for this thing to understand more about yourself or your community.”

Filmmaker and artist Israel Ekanem, meanwhile, had been thinking about the history of slavery in Nova Scotia (“Yeah Nova Scotia is beautiful, but yeah, it had its not-so-good past, right? And we can kind of forget about this because it happened, but on the other hand, we have to do better,” he begins his phone call with The Coast). For his part in the UNSEEN, the prolific director created a 10-part film, titled Slave/Servant/Human. Sliced into stand-alone chapters, the work moves you through a Memento-style, shuffled-deck narrative that traces slavery's legacy in Nova Scotia.

A still from one of Israel Ekanem's film chapters in the UNSEEN.

Culminating with footage Ekanem shot during a memorial for George Floyd on Spring Garden Road this spring—“I just shot as much as I could while on my knees for eight minutes and 46 seconds,” he recalls—the collection moves from “really heavy, really sad to a more hopeful approach.” (The app pin numbered 10 is Ekanem’s favourite, with the memorial footage being spliced with Stephen McNeil’s September apology for Nova Scotia’s systemic racism—and a reply to the apology from Eddie Carvery that Ekanem shot. “A slave is a human being, which is to say a person. And a person has a right to say ‘OK, you know what, you apologized to me but maybe you should put in some action.’ And the way he put it across is what made me end the film that way,” Ekanem explains.)

Sometimes, the app stutters as it loads new pins. Sometimes, you have to scrunch and shift on the couch, pointing your camera around the room until you find the artwork through its screen. (Watching snippets of Ekanem’s film and hearing it before seeing it turned this defect into a bonus, because the sound enveloped so much it felt like being in the shot, not on your couch—a meta amount of immersive feelings.) When you close down the app and finally put your phone down—closing the window in your palm, if only for a moment—you’ll have opened a million thoughts in your mind—making what’s UNSEEN feel a little more in view after all.